A few weeks ago we posted a video of a blue crab molting, and about the blue crab reproductive cycle.  The man narrating the video was Leo Lovel.  That video was an offshoot of a segment for WFSU-TV’s dimensions program, which we present here.  As a commercial fisherman and restauranteur, many of the species he makes his living off of are residents of Salt Marsh and Oyster Reef habitats. 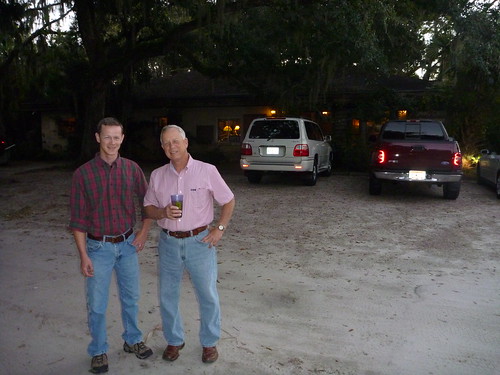 Clay (L) and Leo (R) Lovel outside of their business, the Spring Creek Restaurant.

I heard about Leo Lovel from Rick Ott, a friend of mine who owns a recording studio in Sopchoppy, FL.   Rick was working on a project to record Leo’s books, The Spring Creek Chronicles 1 & 2, to audio files for books on tape or CD.   Rick thought I might be interested in Leo’s short stories about his fishing and hunting experiences around the big bend, dating back to his childhood, so he gave me a copy of the first book. I read some of the stories and then arranged to meet Leo to talk about the books.   At that meeting is where he told me about his idea to publish the All Florida Reader.   Now, Leo’s day job is owner of a restaurant called Spring Creek Restaurant.   It’s a family run business and the Lovel’s have cultivated a very loyal following throughout the southeast over the past 30+ years.   They either catch the seafood themselves or they buy it fresh, only from local fishermen.   It’s a pretty time consuming way to stock a seafood restaurant menu, but it’s the only way Leo Lovel will serve you a meal.

Back in the 90’s, Leo was also a commercial fisherman who was on the front line of the Florida net ban battle.   Although it doesn’t seem like such a long time ago, that era is quietly passing into Florida’s history as those old-timers pass on.   And that’s the unusual value I found in the stories that Leo took the time to put down on paper… these are first hand personal accounts of a specific area and people over a long period of time.   But Leo took his book project a step further.   He turned it into a tool in his personal attempt to help motivate local school kids to “want” to learn to read and write.  That’s the All Florida Reader and I think that speaks volumes about Leo Lovel. 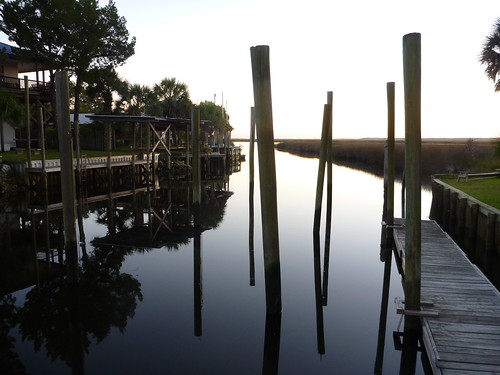 Leo's marina at Spring Creek Restaurant. Into here will drift boats carrying what will become dishes in the restaurant.