The following is the first of three or so videos on the big October oyster trip.  In this one, you get a long busy day in the field condensed into two minutes (it’s much less exhausting that way).  We’ll have videos in the next couple of weeks on David’s co-collaborators (including video of the Georgia/ S. Carolina team and all the sharks they caught) and a video on David’s own team. 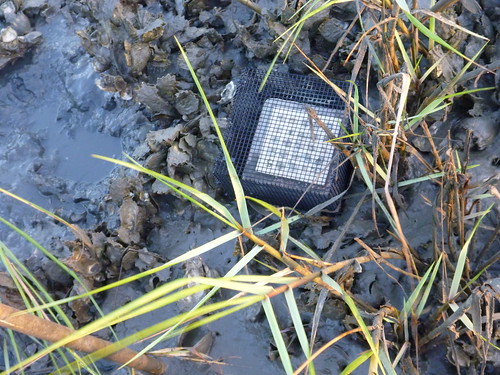 The "October Oyster Push" had many objectives, but none took as much time to implement than the tile experiment. Seeing how these baby oysters- spat- grow over the next few months will give David an idea how oysters typically fare at each reef over the course of their lives.

I spent most of this past week feeling pretty darn good about having just finished our October sampling and experimental objectives out on the oyster reefs.  Of course, this glow continued into the weekend as my football team pulled out a W in Tallahassee.

But back to the science.  Although Rob chronicled each day of our crazy road trip, I want to relive it once more just to give the trip from my perspective.  So, here are my top-ten thoughts:

Number 1: Planning the details of the road trip (housing, which team is going where and when) as well as figuring out how to set up the tile experiment (see video) was pretty stressful.  Thank goodness I had Tanya around to bounce scheduling ideas off of.  Because I kept chaning my mind, I think Tanya made like 6 different versions of our schedule.

Number 2: I talked the NC and SC/GA teams into doing the aforementioned experiment with oyster spat to examine how actual predation and the fear of being eaten affects oysters up and down the coast.  I successfully convinced the teams partly because I  emphatically claimed that the additional work load would only be five hours of more work at each site.  Well, I got that wrong.  It was probably triple that estimate.  That’s one of my flaws: I always underestimate how long research tasks take, which is bad because you constantly feel behind as a result of being over-scheduling.  Rule of thumb: always multiply my work estimates by at least 2.

Number 3: I never want to see a dremel again.  With dremel in hand one evening at Saint Augustine, I had only extracted ¼ the spat I needed for the experiment but the time spent on this task had already surpassed my previous estimate.  That’s when coffee and the ability to lose yourself in the task become extremely important.  I guess I took it one oyster spat at a time. 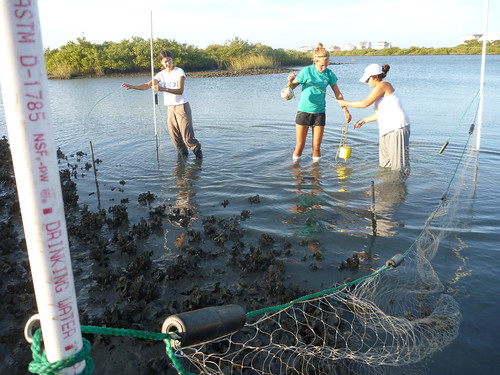 (L to R) Tanya, Hanna, and Cristina pick up the slack while David dremels away back at the lab space.

Number 4: I could not have lost myself in the task of setting up the experiment if it hadn’t been for Tanya, Hanna and Cristina.  Knowing that they were fully trained to carry out the sampling objectives, I did not have to busy myself with those numerous tasks, such as setting gill nets and traps (and retrieving the catch), taking sediment and water samples, etc.  In fact, after finishing the sampling objectives and follow-up lab work, they would immediately begin helping me with the experiment by cleaning adult oysters and identifying spat for me to extract with the dremel.  With that help, I was able to focus solely on dremeling.

Number 5: Dremeling 1080 spat out of adult oyster shell stinks.  Did I already say that? Well, this task deserves two spots on the top-ten list.  In tact, I probably attempted to extract over 2,000 oysters because I would often slip with the dremel and accidentally kill the oyster spat that I had spent five or so minutes on. 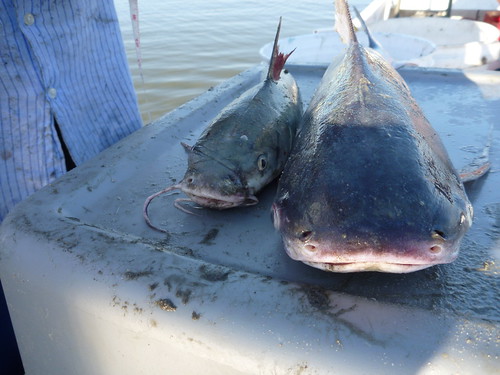 Hardhead and sail catfish seem to be the dominant predator of the Florida Gulf sites. By eating mud crabs that predate oysters, these fish perform an important function on oyster reefs.

Number 6: we couldn’t have asked for better weather.  In fact, I think there were some temperature records being set.  Despite these warmer than usual temperatures, there was about ½ the diversity and number of predatory fish on our reefs.  So, going against my expectations, these Florida sites are experiencing some seasonality in the assemblage of predators.  Interestingly, all teams were catching red drum on their reefs; guess it’s their time of year.  The red drum mostly had smaller fish in their stomachs.  The SC/GA team was still catching lots of sharks.  And catfish was still the most abundant predator on our reefs.  Those slimy things are definitely major players on southern oyster reefs because they had lost of mud crabs (who eat oysters) in their guts.  Final detail about the Florida sites is that my northern locations (Alligator Harbor on Gulf and Jacksonville area on Atlantic) had more predatory fishes than did the more southern sites in Florida…. intriguing.

Number 7: We had to change plans at the end of the week and this mid-course change actually went smoothly.  This change came about because the housing space near our Jacksonville site was not conducive for setting up the tile experiment.  Luckily, Hanna and Cristina ventured up to Jacksonville to figure all of this out for me.  This “divide and conquer” strategy allowed Tanya and me to finish up the sampling and experimental objectives in Saint Augustine, while Hanna and Cristina began sampling in Jacksonville to keep us on schedule.  And rather than resting up in Jacksonville, Hanna and Cristina ripped up oyster habitat and drove it back down to Saint Augustine.  They looked pretty rough upon that later return to Jacksonville.  But after a good dinner and a few hours of sleep, their oyster delivery allowed us to work on the materials for the Jacksonville experiment in a much better laboratory setting.

Number 8: Team morale and will to finish objectives hit a low point once we reached Jacksonville.  The lodging for the first evening was haunted with cockroaches: this is Hanna’s kryptonite.  Luckily, Tanya whipped us up some good pasta to help keep our minds off of the roaches.  The next morning, cockroaches began to seem not so bad.  When we got to the boat-launch and found there to be no wind, I knew it was trouble because this site had the reputation for being particularly buggy.  So, we headed into the mouth of our creek and hit the first reef.  Not too bad… actually, no fish in the nets.  Only a few bugs and two free hands to swipe them away.  But as we ventured further into the belly of the creek/bug hell and found tons of fish in our nets, I began to worry about mutiny.  As I was exhorting the crew to extract tons of fish from the next set of nets, I realized that freeing this many fish would take twice as long because we needed to spend an equal amount of time cursing the no-see’ums and keep them out of our ears and noses; kind of hard to do with fish in your hands.  While taking fire from the no-see’ums, we then began sustaining additional injuries from other natural agents.  I suffered my first good-sized oyster cut.  Hanna got her finger nearly cut off by a large stone crab.  For the pain finale, a decent sized catfish stabbed my hand with the barb of its dorsal fin.  I don’t blame it, but daggum that hurt.  At this point, the unpleasantness was almost comical.  Note to self: buy hats with bug nets to combat no-see’ums.

Number 9: All of the pain and stress of that week is now good fodder for the lab to laugh about and bond over.  That’s one of the perks of conducting research as a team.  And that’s one of the reasons why Big Jon, Randall and I are still collaborating. 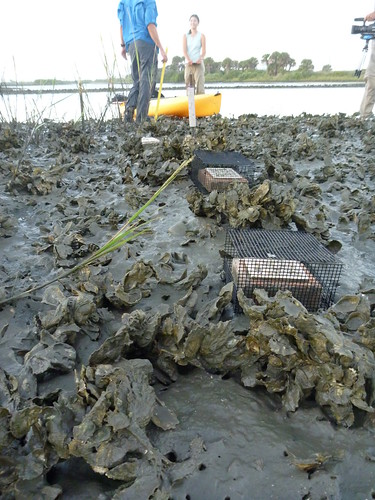 David walks away from the tiles he and his team spent so much time putting together. He won't know how successful the experiment was until he travels back to these sites.

Number 10: Now that we have all caught up on sleep, have relived our stories, and have begun to look at the data, I now stress about whether the tile experiment will actually work.  Like most experiments I conduct, I put a lot of effort into something that has a 50% chance of not succeeding.  For example, the spat that I extracted and adhered to tiles may have been overheated by the dremel/extraction process…are they dead already?  And then, oh boy…what if the glue doesn’t hold?  That’s what really keeps me up at night.

Hi David,
Thanks for sharing your photos on Flickr! I’m researching images to use in an oyster reef and toadfish exhibit here at The Florida Aquarium in Tampa. Would you allow us to use a couple of your oyster reef images in our exhibit graphics? I’m thinking of the tulip snail and mud crab on the oysters. I can provide a photo credit as you wish, and download from Flickr.
Do you have any images of oysters underwater? That’s been a very hard shot to find!
Hope to hear from you, and thanks…
Polly Perkins
Exhibit Developer & Copywriter
PH: 813-273-4000 x4251
701 Channelside Drive
Tampa, Florida 33602
The Florida Aquarium is a 501(c)(3) not-for-profit environmental organization whose mission is to entertain, educate and inspire stewardship about our natural environment.

[…] increase in the no-see-um population at dawn and dusk was not so pleasant however, as David has duly noted. The dawn low tide at Jacksonville brought the worst swarms we’d ever encountered in the field. […]

[…] explain the intricacies of the experiment when we post those videos in January.  Or, you could watch our coverage of that first experiment, conducted in the fall of 2010.  Watching that video and then watching […]

[…] (either from the field, which can be pretty difficult -as you can see from the first round of our tile experiment, or from a hatchery), and gluing them to portable sections of “reef” (ceramic tiles […]

[…] that from the shell they settled on. (If you don’t remember and want to check it out, go here.) Two of our oyster "families" in the water tables at Whitney Marine […]