The following photos are of samples taken at each of Dr. Kimbro’s sites, as mentioned in his previous post.  After surveying the reefs to see what large fish and crabs were living in the reefs, he and his team turned to looking at the oysters and the creatures living under them in the mud.  That’s what you’re seeing here.  Click on any photo to make it larger. 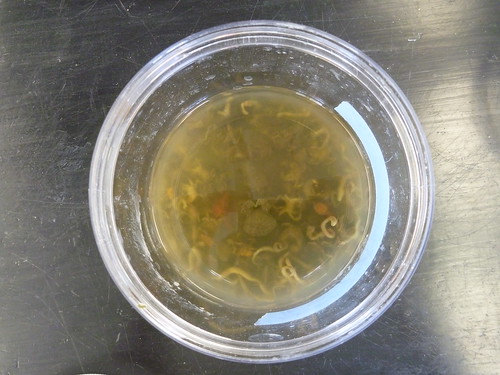 When David took the jars out, we waited a while for the sediment in this one to settle, but the ethanol preserving the samples really never got clear.  It’s a muddy location, dominated by omnivorous hardhead catfish.  That may account for this site having less crabs and clams.

This jar looks a little like chicken noodle soup.  The “noodles” are polychaetes, which are a varied class of worms living throughout the ocean. 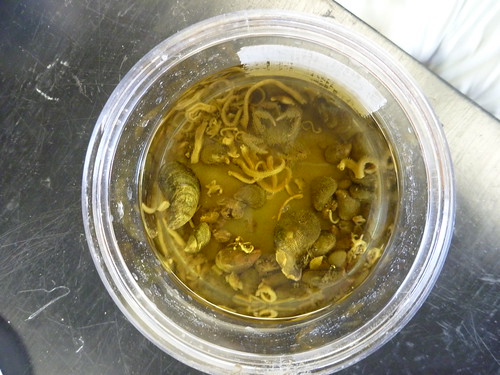 This is David’s other Gulf site.  The reefs there are sparse with slightly larger oysters then in Alligator Harbor.  As you can see, there are more small crabs and clams living in the reef as well. 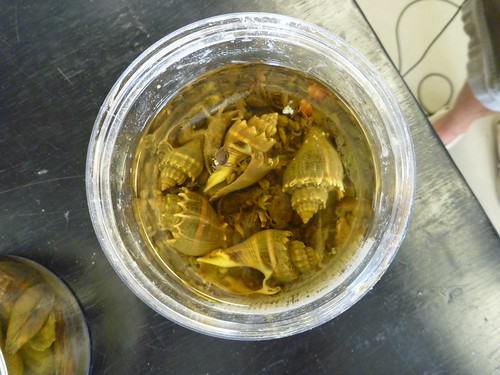 This site had what David called an “infestation” of crown conchs, which are tearing through the oysters there.  He’ll be making a trip down there soon to consult with some locals about this phenomenon. 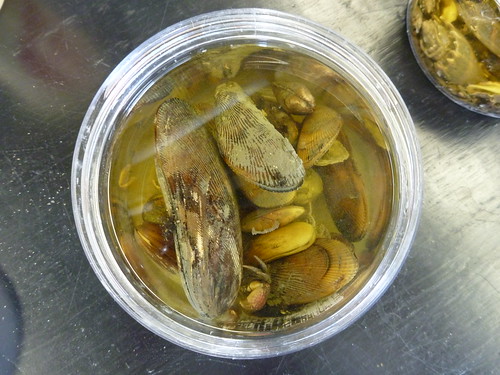 This was the “Super-sized” site, with larger clams and oysters.  This is their muddiest site, waist high in places.

So there you have it.  Part of the fun of watching scientific research in action is seeing raw data like this and how the researchers will then go about deciphering its meaning.  Some inferences can be drawn from this data and the previous data regarding large predators like catfish.  But this is just the beginning of a two year study.  There is much more sampling and experimenting to do before David and his crew have a complete understanding of how all the factors are working together, and how those conclusions can then be used to benefit these ecosystems.

Comments and questions below: