As my assistant Tanya eloquently wrote in our last post, our July efforts produced interesting data on the predatory fish and crabs that hang around oyster reefs from North Carolina to Florida. 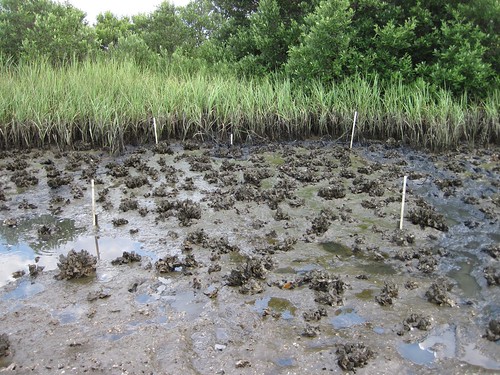 Cedar Key reefs, like the one above, tended to be sparser with slightly larger oysters than those in Alligator Harbor

After working on our sleep deficits, we dialed up some Willie Nelson on the iPod and were on the road again during the second week of August.  Our goal: to determine if predator patterns on oyster reefs from NC to Florida were associated with any patterns in oysters (e.g., number and size) and smaller animals that both use oyster reefs as habitat (e.g., polychaetes and crabs) and as food (e.g., crabs).

This destructive sampling involved ripping up large sections of our reefs and placing them in large bins while trying to prevent any crabs or other critters from falling out.  Because these are marine organisms, we had to work fast and quickly get them into a temperature-controlled room (50 degrees F) back at FSU’s Marine Lab.  Easy when collecting samples from nearby Alligator Harbor, but not so easy when collecting samples at our other three sites in Florida. 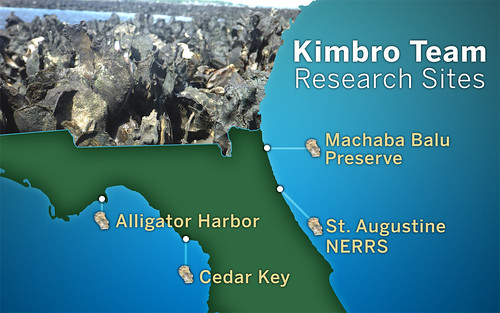 But before dashing back to the lab, we deployed some instrumentation and took lots of sediment and water samples (more about this stuff later).  Then, the race to keep our samples fresh commenced and mostly occurred on I-95 and I-10; I’m still seeing lane dividers and road reflectors when I close my eyes at night.  After a few hours of sleep, we would drive back across the state to another site and start the process all over again.  All of this sleep deprivation and highway racing against biological clocks made me feel like I was Smokey the Bandit boot-legging some Coors Beer across state lines (maybe I’m showing my age here, but a classic movie nonetheless).

Luckily, we had some great volunteers to help process these samples back at the lab while I was out ripping up oyster reefs, because processing each sample took a long, long time. 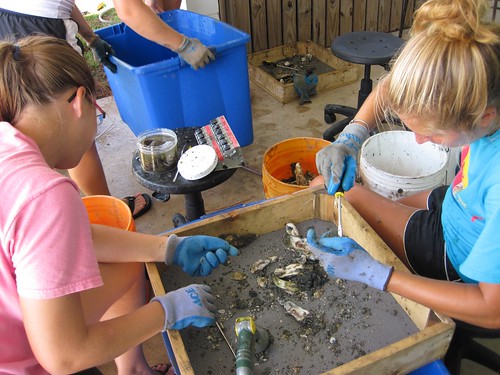 After a week and a half of sample processing, it was really cool (or so I hear, because I was mainly on the road) to see all the animals living within the oyster reefs and how they and the reefs themselves differed from site to site.  For instance, Alligator Harbor seemed to have dense reefs of small oysters while Cedar Key had sparse reefs with slightly larger oysters; both had few mud crabs (maybe due to the abundance of big fish?).  We also noticed that animals north of Jacksonville must be on growth hormone supplements because everything is gigantic (bigger mussels, bigger crabs, and bigger oysters).  Meanwhile, the crown conch population in St. Augustine is huge and appears to be mowing down the oysters.  So, now I have new side-project: why are crown conchs an abundant nuisance for oyster reefs in St. Augustine but not at other sites?

From one week of field work, we now have about a month or so of associated lab work that will involve counting, measuring, and identifying every organism.  I’m really excited to see how all the predator, intermediate consumer, and oyster reef data correlate from estuary to estuary.

[…] want to hear from you! Add your question or comment. This entry was posted in On the Reef and tagged Alligator Harbor, alligator point, coastal […]