I’ve come to Saint Augustine to get the last of the footage I need to finish the In the Grass, On the Reef documentary, and we’ve come a long way from where we started from on this blog.  One year ago today, this site went live and Randall and David introduced you to their research.  The oyster study had just gotten its grant from NSF and we went out with David as he walked out into Alligator Harbor in search of study sites.  It was a slow, messy day- but a necessary first step. 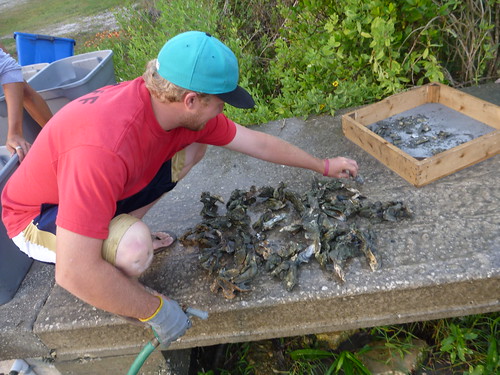 Phil sprays clean a bushel of oysters, the second step in a three step process to remove tiny mud crabs from the many crevices throughout an oyster clump.

A year later and David & co. are preparing an intensive experiment (described in detail by David earlier) to kick off year two.  It’s a far cry from last May, when we saw David, by himself, figure out how he was even going to get to the sites.  He and his crew are essentially building 21 enclosed oyster reefs (12 in Saint Augustine and 9 more in Jacksonville)  populated by different configurations of animals.  Most of these animals have to be caught locally (With a couple of exceptions: the clams were purchased from a hatchery and some catfish and toadfish from SA will be used in Jax).   The crew has to be in total control of the quantities of smaller intermediary consumers, the small mud crabs and oyster drills that live in the nooks and crannies of oyster clumps.  This means defaunating (removing critters from) almost forty bushels of oysters.  And during the process, all of the toadfish, catfish, blue crabs, stone crabs, crown conchs, mud crabs, oyster drills, oysters, and clams have to be kept alive and healthy.  If the crew takes too long getting this set up, they could start losing some of their participants.  And then of course, when they’re done in Saint Augustine, they’re doing this again in Jacksonville! 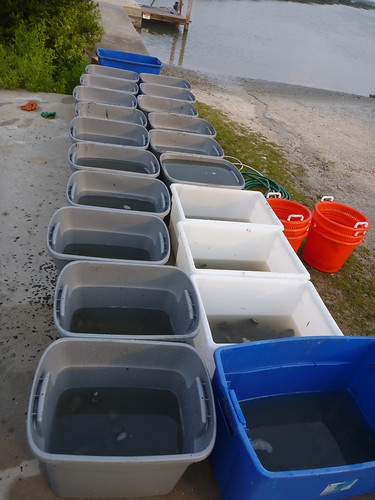 After Phil finishes that bushel, he and Hanna have to get to these. About this many were cleaned out last night as well (in the last step, David looks through every clump and tweezes the crabs out).

It’s a lot of repetitive, painstaking work.  Especially with a camera in your face.  Many little things can and do go wrong; and, as in the case of the tile experiment, sometimes you have to redesign your experiment.  To me, the real value of this enterprise has always been that you get to see science as it really is.  It can be messy.  It can be frustrating.  But it can also be illuminating, and rewarding.  I appreciate that David and Randall let us document the ups as well as the downs.  It can’t be easy having someone (and by extension, many other someones) looking over your shoulder as you work.  I know I’d have a hard time if someone were watching me edit the program- the process of streamlining story threads can be unwieldy and choppy at first, and in retrospect the way I should have shot certain things becomes more obvious.  But you work around your challenges and the process becomes more enjoyable.  I imagine it’s the same for an experiment as it is for  TV show- when it comes out right, it’s worth the headaches you overcame to get it there.

As for the show, it’s a good mix of nature footage AND scientific process.  We’ll work to maintain a balance in upcoming videos between footage of the animals interacting in the various habitats we cover and the work done to understand them.

Below is the schedule Tanya came up with to get this experiment done.  I always find the planning that goes into these things to be instructive.  Like the October schedule, circumstances cause them to deviate, but this is the starting point: 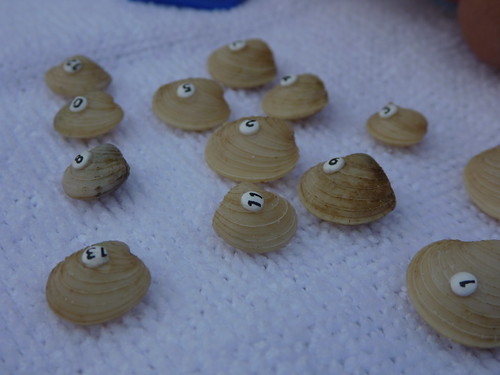 Using miniscule tags meant for tagging bees, David and Tanya tag the clams they'll deploy in the experiment. Thirteen down, seven-hundred-and-seven to go!

Afternoon (low: 5pm): One team installs ½ live shell, takes sediment/water samples. If all predators have been obtained by this time: Second (larger) team collects mudcrabs, and all predators added to cages. 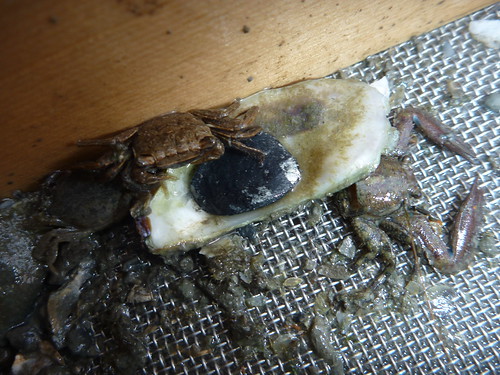 "Defaunated:" these mud crabs are waiting to be added to the experimental reefs in precise numbers.

Monday 6/6/2011 – Morning (low: 7am): Everyone collects mudcrabs. Someone drives back to whitney to get blue crabs/stone crabs/toadfish. All predators added to cages.

As if to prove a point about the schedules changing, weather in the area has shifted today’s field activities until tomorrow at the 4:45 AM low tide. They will then, if all goes well, attempt to do their normal afternoon activities.