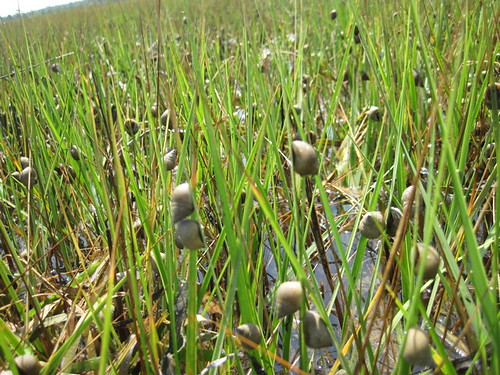 One of the marsh animals that we have been studying for the last year (in the absence of oil) is the marsh periwinkle, Littoraria irrorata. This snail is very abundant in many marshes and is particularly visible at high tide when it climbs the plant stems to get out of the water and away from its predators, primarily crown conchs and blue crabs.

While hanging out on the cordgrass stems, the snails will often create grazing scars that look much like a razor blade cut through the grass. Even though they don’t remove much plant tissue, they can have a big impact – fungus colonizes their grazing scars, and if the fungus becomes abundant enough, it can kill the entire plant, leading to marsh loss. (See the excellent work done by Brian Silliman at UF on this topic.)

One of the interesting aspects of many Panhandle marshes is that needlerush, a taller plant than cordgrass that usually occurs closer to land, can grow side-by-side with cordgrass at the water’s edge.

When needlerush is there, lots of snails climb on it despite the fact that they don’t eat it. (We think they like needlerush because it is taller and provides a better escape from predators than cordgrass.)

Because we noticed that the cordgrass that occurs with needlerush is taller and healthier than cordgrass that occurs in patches by itself, we are currently conducting an experiment to see if this pattern is due to the snails spending less time on cordgrass when needlerush is around. Each experimental plot is surrounded by a cage that serves to keep snails either in or out so that we can test their effects on the plants. You may notice the snails are very fashionable – we ‘tag’ them with nail polish so that we can differentiate the ones we put in the cages from ones that get in from the surrounding marsh. Some cages contain cordgrass only, whereas others contain a mix of needlerush and cordgrass. Finally, in some of the cages we have clipped the above-ground portions of all of the neighboring plants – this allows us to see whether the cordgrass simply prefers the environment that needlerush grows in, or if the needlerush must be present for the cordgrass to benefit.

As long as our experiment isn’t prematurely interrupted by oil, then we should have an answer to our question by the end of the summer!

Randall’s research is funded by the National Science Foundation. The song used in the video is Florida Breeze, by Craig Reeder.

Are two friends better than one?

[…] (i.e. some have short grass, some have long grass, some have a combination of grasses, etc.  The snail experiment is a good example).  The oval with the squares in it represents Baymouth Bar, split into regions. […]

[…] and experiments for this summer. To clear some room in our calendar, we’re going to end the snail experiment that has been running for almost a year in St. Joe Bay. It has largely run its course – the cages […]

[…] the last year!  And finally for this blog, because the beginning of the snail experiment was the first thing we documented last summer when we started this project with WFSU.  It’s nice to come full […]