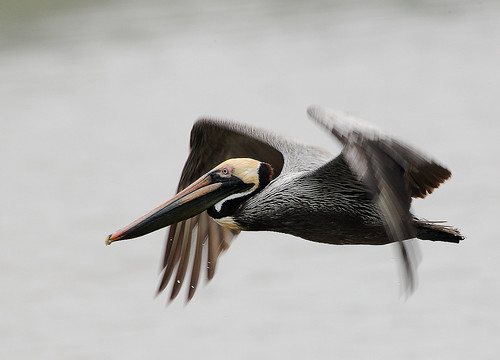 Let’s talk about the little guys.

Think a little smaller than this pelican here.  Obviously, pelicans are a symbol of our coastal areas, flying in those long rows as they do while we’re driving down Highway 98.  Pelicans covered in oil have become the poster-species of the environmental toll of the Deepwater Horizon oil spill.  It’s horrifying to think of animals as evolved as dolphins washing up on the shores, and people of course are always concerned about sea turtles.  As they should be.  They are all important parts of the Gulf ecosystem.

But they are not the only important parts.  There are other creatures that probably won’t make it on to that oil spill tragedy poster because, let’s face it, they already live in muck.  Those are the species that we’ve been most concerned with on this site.  They are worth worrying about, and I’ve come to find them cute in their way.  I keep thinking I need to try to get Disney to make a movie based in a salt marsh or oyster reef, where mud crabs and periwinkle snails sing and hide from predatory blue crabs (who, like those sharks in Finding Nemo, might be sympathetic characters themselves).  When kids are carrying plush fiddler crab dolls, maybe the little guys would get some consideration.  As it turns out, however, I have no pull at Disney.  So I’ll just talk about them right here on this blog.

Like the fiddlers.  They eat sand.  They shovel it in their mouths with their smaller claws, while they do the mating dance for which they’re better known with their larger “fiddle” claws.  I see thousands of them at a time in a salt marsh, always scurrying away and making that sound, a little bit like trickling water and a little bit like tiny bubble wrap being popped.  Of what importance are these silly little guys? 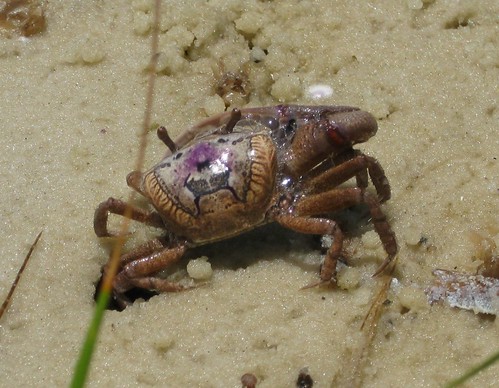 Fiddler crabs are crucial to the survival of a salt marsh

So maybe the fiddler crab hasn’t found himself at the center of any teary oil spill montage.  But he’s an animal, and a fairly popular pet.  Spartina alterniflora– aka smooth cordgrass- may never gain a foothold in the popular imagination proportionate to its ecological importance.  It is the foundation species of a Gulf salt marsh.  These marshes act as a filter for pollutants flowing into the ocean, protecting important estuaries such as those at the mouth of the Apalachicola River.  Marshes provide shelter to a number of commercially important species (shrimp, mullet, and blue crab, for instance).  And marshes also help absorb storm surges and prevent erosion.

Those are just a couple of examples.  There are, of course, more.  Tasty, tasty oysters filter water and prevent algal blooms lethal to other species.  Toadfish have faces even other toadfish may not love, but they eat animals that would decimate oyster reefs if left unchecked.  Those oyster predators are interesting as well.  Mud crabs might get as large as 4 cm and have these thick little claws which tear through oyster shells.  Oyster drills are small snails whose tongues (radula) are covered with thousands of small razor-like teeth.

As we move forward with this project, we’ll see more and more of all of these coastal denizens.  So far oil has not reached the areas Dr. Hughes and Dr. Kimbro are studying, and so there is always hope that they may be spared.  If oil does arrive, many of these species could be severely affected.  And while some of them may not look like much, the harm that would come to them would have repercussions felt beyond their own habitats.

This snail lives on an oyster reef

Interested in seeing a fiddler crab plush toy as a WFSU-TV pledge premium?  Well, that isn’t likely to happen. But we will take comments and questions, as usual.

As if to underscore the point of this article, Fresh Air on NPR just had a segment on animals affected by the oil spill. What animals do they talk about? Sea turtles, dolphins and pelicans. Don’t get me wrong- turtles are my favorite animal. And my wife LOVES pelicans, especially when they fly by our car on the way to Apalachicola. While they’re all important, there are so many other species that aren’t the “big ticket” animals that are affected, and whose health affects us, even if indirectly.