The end of summer is a good time to pause and think about any general patterns that emerge from observations over the course of the last year(s). Sometimes it is easy to get swept up in the minutiae of individual projects and forget about the big picture. Of course, these patterns aren’t definitive (i.e., don’t quote me on this!), but they can be useful to think about, particularly when considering future avenues of research. 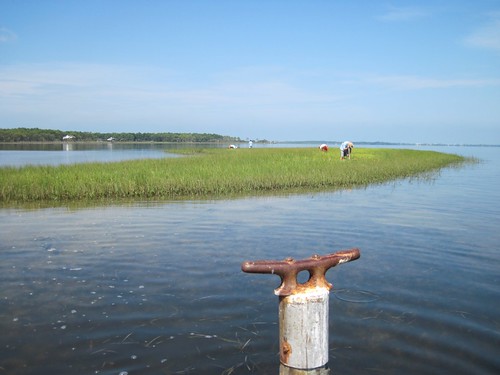 Marsh island in St. Joe Bay viewed from the waterand marshes on the edge of the mainland.

So what sort of patterns can I describe to you after two summers in the marshes of St. Joe Bay? One that doesn’t take a PhD to recognize is that there are two distinct types of marshes that we sample: marsh islands and marshes on the edge of the mainland.

But aside from the obvious fact that one is an island and the other is not, there are some additional interesting differences:

1. The slope of marsh islands is typically greater than mainland marshes, so that you move quickly from plants that can tolerate frequent flooding (cordgrass) to plants that are more “terrestrial” (pickleweed, saltwort, etc.). On islands this transition can occur within a few steps of the water’s edge, whereas mainland marshes typically have a large area (I like to think of it as a football field) dominated by cordgrass. 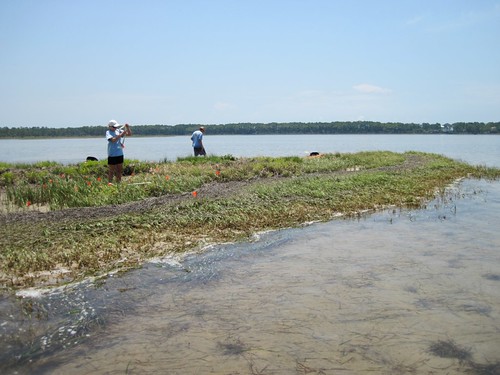 Elevation on islands changes rapidly compared to the mainland. Even slight differences in height can influence plant communities. 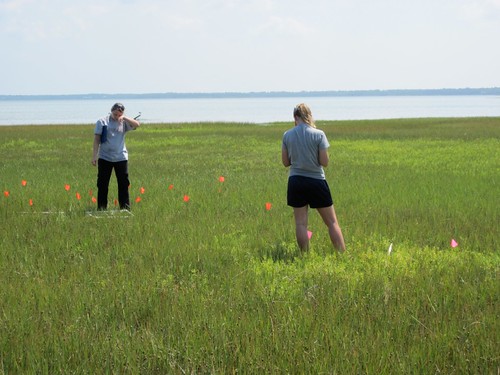 2. Marsh islands tend to have fewer periwinkle snails than mainland sites, although they are certainly present. 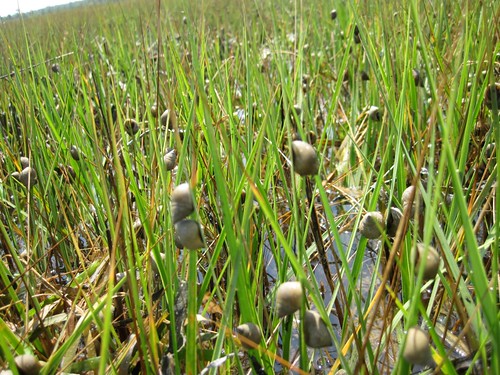 Abundant snails in a mainland marsh.

My guess is that the snail predators (blue crabs, crown conchs) that lurk just at the water’s edge have greater access to snails on the islands at high tide, because they can move in from all sides of the island. In contrast, the predators near mainland sites have only one point of entry into the marsh. 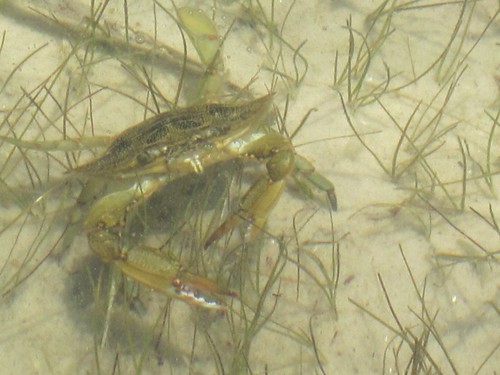 Blue crab lurking in the seagrass at the edge of the marsh during low tide. 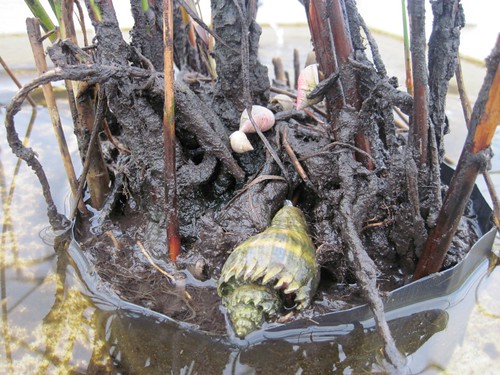 Crown conch foraging for snails in a lab experiment.

3. Perhaps not surprisingly given that they are surrounded by water, the marsh islands typically have fewer grasshoppers jumping around. We’ve also had far fewer snake encounters on islands, which I consider a good thing. Probably because land-based predators such as snakes, raccoons, etc., are less frequent on islands, we also observe greater numbers of nesting birds on the islands than at mainland sites.

4. One clear difference that I can’t explain but hope to examine in the future is that cordgrass plants collected from the islands (which can only be done with a special permit from the Department of Environmental Protection) survive better in our greenhouse at the lab than those from mainlands. It may simply be the growing conditions, or island plants may be hardier overall. Stay tuned.

As we continue to process, enter, and analyze data, there should be additional trends emerging. And we’ll likely find out that some of the patterns we think we see don’t hold up to the test of actual data. And so goes the process of science!