Episode 5: The True Value of a Salt Marsh

Much like David finds it hard to distill why the oysters that he studies are so intriguing, I often struggle to convey the charisma of the salt marshes and seagrass beds where I spend so much of my time. At least people like to eat oysters! It can be harder for people to find a connection with the plants that form so many of the critical habitats along our coast (unless of course people misunderstand the meaning of “In the Grass” and think I study a VERY different type of plant!). But even if it is not recognized, there is a connection between the salt marsh and our everyday lives. Like oyster reefs, salt marshes provide many benefits to society, particularly along the coast:

1. A place to live (for marine and terrestrial animals) Periwinkle snails are among the many animals that make use of the salt marsh habitat.

Even if you’re one of those folks who find it hard to get excited about a bunch of plants, don’t tune out – the salt marsh is teeming with animals! Snails, fiddler crabs, mussels, grasshoppers, dragonflies, and snakes (!) are all critters that we encounter regularly when the tide is out. And there’s always a bit of an adrenaline rush when you see an alligator hauled out nearby. Even better, when the tide comes in, there are lots of animals that you and I (or at least, I) like to eat. Think blue crabs, mullet, and sea trout, for starters. Studies in Florida estimate that marshes provide up to nearly $7000 per acre for recreational fishing alone. Not bad.

2. A safer place to live (for people)

Although it’s generally frowned upon to build houses in the marsh (since it makes it hard for all those animals I just mentioned to live there), it’s a great idea to have lots of healthy marshes near your coastal property. Marshes can protect the coastline from waves and storms, leading to less damage in areas with marshes present. One estimate places the dollar value of coastal protection in the U.S. at over $8000 per hectare per year in reduced hurricane damages! Although here’s hoping that we don’t get an opportunity to test that particular benefit this year.

In addition to reducing the size and strength of waves, marshes also prevent coastal erosion. An unfortunate example of the role of marshes in erosion control came following the Deepwater Horizon oil spill – plants in areas of the marsh that were heavily oiled died, leading to greatly increased rates of erosion in those areas (Silliman et al. 2012). Although the benefit of marshes for reducing erosion and combating sea level rise has been recognized for a long time, there are not any good estimates for what this erosion control is worth in $$. Given expectations of sea level rise in the coming years, I think that the motivation to understand the conditions that lead to sediment accumulation in marshes will only get stronger. 3. Clean water (for animals and people) Because marshes lie at the intersection of the land and the sea, they serve as a filter for things trying to move between the two. When it comes to run-off and pollution from the land, it’s a very good thing that they do. Simply having a marsh present can serve as an effective alternative to traditional waste treatment. Of course, the protection can go the other direction too – marshes played a critical role in keeping oil from the Deepwater Horizon oil spill from getting to higher elevations.

4. A place to graze (for livestock)

Support for livestock grazing is an important role of marshes in some areas, including the U.K. Although it’s not a benefit commonly associated with marshes in this area, the decaying fence posts that extend out into some areas of St. Joe Bay suggest that it wasn’t too long ago that marshes were used for a similar purpose here!

I could go on, but these and other benefits of marshes are described in greater detail in a recent review by Barbier and colleagues (which I referenced on this blog in May of 2011). Here is the table that they put together summarizing the monetary benefits that we derive from intact salt marshes: Luckily for us, salt marshes keep working their magic even in the absence of accolades or appreciation. But greater appreciation is needed to help curb the decline of salt marshes around the world – estimated to be as much as 2% per year! We hope that this blog will help generate greater understanding and enthusiasm for the incredible coastal habitats that we are lucky enough to work in every day. Let us know how we’re doing!

In the next two weeks, we delve into a habitat that we have only occasionally covered: seagrass beds.  Next week we examine, with visiting researcher Dr. Peter MacReadie, seagrass beds’ role in fighting global climate change.  The week after that, we head to Bay Mouth Bar, one of the most ecologically unique places in the world.  Also, we’ll be look at the failure of the Apalachicola Bay oyster reefs from a biological perspective.  Here are a few images of our visit to a Saint Joseph Bay seagrass bed and of Bay Mouth Bar at low tide, when you see all kinds of strange and interesting creatures: 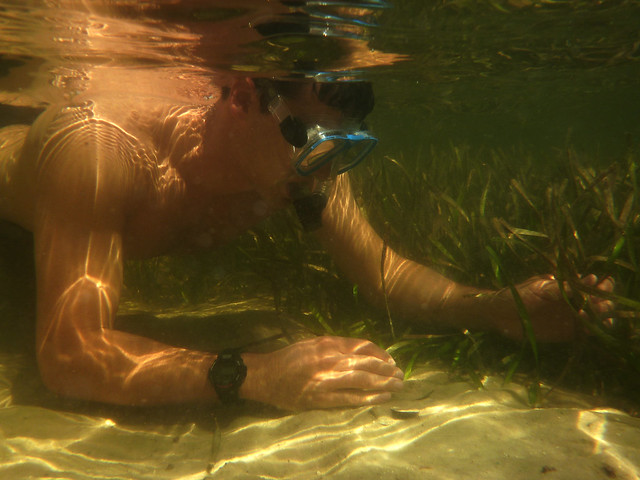 Music in the piece by Kokenovem and Pitx

[…] shoot day at Bay Mouth Bar as every animal seems to be eating every other animal.  Oyster reefs, salt marshes, and seagrass beds- the habitats we’ve covered over the last three weeks- reward those who […]

There were a couple of shots that I left out of the video for time reasons that I think are worth noting. I considered showing Operation Migration’s first guiding of whooping cranes into the St. Marks Wildlife Refuge. The cranes make use of the extensive marsh habitats at the refuge, dining on food such as blue crabs. I had also wanted to include George Weymouth painting black necked stilts at the edge of a marsh. Tourist dollars generated by the beauty of the ecosystem are somewhat more quantifiable than the inspiration that nature gives artists. But a lush habitat full of visually interesting creatures will always have value, regardless of the dollar value.

[…] And like oysters, salt marshes provide more benefits for us than simply what we can eat, including protection from storms, increased water quality, and erosion […]