by Rob Diaz de Villegas December 19, 2013 0 comment
Video: Cycling the Capital City to the Sea Trail. Project managers Jon Sewell and Jack Kostrzewa show us the highlights of the planned 120 mile loop between Tallahassee and the coast. Cyclists round the bend at the Trout Pond Trailhead. They regard the two mile trail, which terminates at a quiet lake with camping facilities, as a hidden treasure. Over the next decade, it will become part of a 120 mile network of multi-use trails connecting Tallahassee with the coast.

I’ve often described our EcoAdventures as a glimpse of unpaved Florida, so this video is somewhat of an anomaly.  The Capital City to the Sea Trail is a twelve foot wide paved “multi-use” trail that will connect towns and outdoor destinations in Leon and Wakulla County.  Pedestrians can walk or run it, and its width means that slower cyclists (such as children or me when I finally get a bike) can share the space with faster bikes.  As you see in the video above, two cyclists going one way can pass two cyclists going the opposite way.  It’s off of the main road, so it’s a safer way to get to the coast than to ride on the highway.  Or it will be, anyway.  Most of the trail has yet to be built.

Plans for the CC2ST have gone through a process of public meetings, where citizen feedback has directed priorities for segment construction, and in some cases, redirected the trail itself.  Project Managers Jon Sewell and Jack Kostrzewa took us along the planned route.  It takes existing stretches, such as the popular St. Marks Trail (between Tallahassee and St. Marks), the Ochlockonee Bay Trail, and the Trout Pond Trail, and connects them with the St. Marks National Wildlife Refuge, Wakulla Springs (not originally planned but added after citizens requested it), Panacea, Mashes Sands, Sopchoppy, and Capital Cascades Park in Tallahassee.  When it is completed, there will be 120 miles of the CC2ST forming a loop between Tallahassee and the coast. The trail is more complex than shown in most of the map graphics in the video.  Here is a current map of the proposed trails.  This plan will be finalized and presented to the public in March of 2014.

Jon hopes to begin construction in the next two to three years, with the trail not likely to be completed for at least a decade.  That’s a lot of waiting.  And it won’t be cheap.  I have a few notes on the potential cost and economic benefits, as well as a few other tidbits about the trail.  I also want to note that I have recently become part of this process as a member of the Florida Greenways and Trails Council.  I’ve been finding the process through which trails get made and connected together interesting.  The goal is to connect as many trails as possible and give people options for both shorter or multi-day outdoor adventures.  Anyhow, my notes on CC2ST:

A few notes from the recent meeting of the Florida Greenways and Trails Council:

Well, that’s it for us in 2013.  This has been our busiest year on In the Grass, On the Reef.  I feel we found a nice balance between exploring our natural areas through EcoAdventures and deepening our understanding of our coasts through Randall and David’s research.  While the oyster crisis in Apalachicola Bay seemed to dominate our focus at times, we still hit up oyster reefs and salt marshes from St. Marks to Choctawhatchee Bay.  I’ll be working on a year-in-review post soon.  As for next year, people have already begun coming to us with new EcoAdventure ideas.  And we’ve started editing the second In the Grass, On the Reef documentary, which will air this spring.  I’ll have much more information on that soon.  Until then, have a Happy New Year! 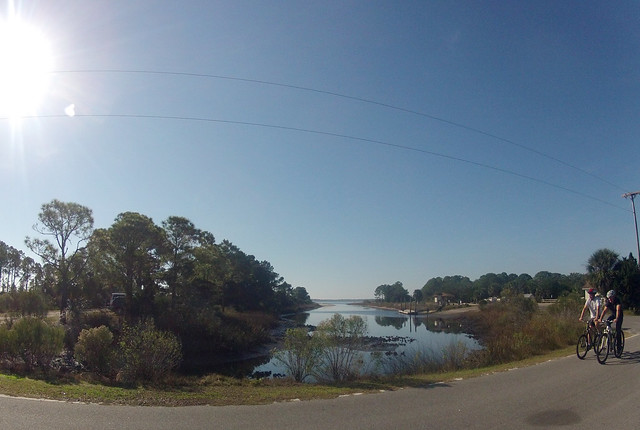 Jon Sewell and Jack Kostrzewa on the Ocklochonee Bay Trail. On In the Grass, On the Reef, even videos on bicycling have oysters and marshes.