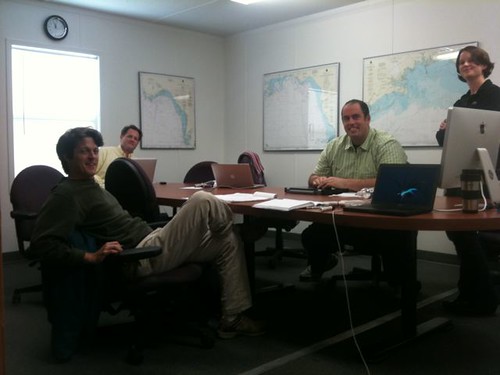 As you can see from the video that summarized our efforts over 2010, it was a busy 6 months of research.  After taking a great break during the holidays, the entire oyster team (Jon = Gulf of Maine Research Institute, Mike = University of North Carolina at Chapel Hill, Jeb = University of Georgia, Randall = Florida State University and me) met for a long weekend to figure out what we accomplished and where we are going in the future.

You might think that our 2011 research plans should already be set given that we received funding.  Well, we did receive funding to carry out some outlandish field experiments in 2011, but these experiments were dreamed up in our offices and may not address the most ecologically relevant questions for our system.   Checking in with the monitoring data is probably the best way to determine if our planned experiments were on target or if they needed to be adjusted and hopefully simplified!

Prior to the oyster summit last weekend, I hounded all of the research teams for all of their data.  Given the huge volume of data and everyone’s busy schedules with teaching classes and other research projects, this was quite the task.  Once Tanya meshed all the data together (also not a simple task), I then moved on to the next task of analyzing our data.

Well, the initial excitement quickly turned into a stomach churning feeling of….where the heck do I begin?  Similar to the way that too many prey can reduce the effectiveness of predators, the data were swamping me…I was overwhelmed and the draining hourglass wasn’t helping (people were flying into town in two days…yikes!).

After multiple cups of coffee, the anxiety passed and I decided to revisit some basic questions: 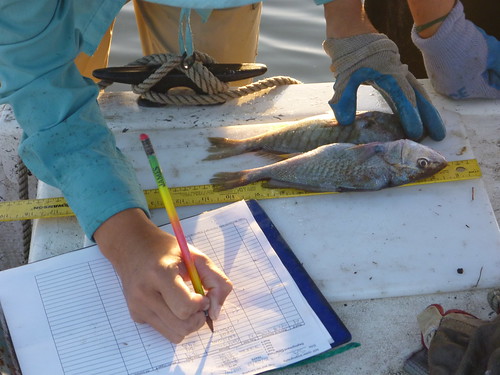 David's team used gill nets to catch the larger fish around the reefs, many of which are top predators in that habitat.

(1) With the gill nets, we obtained predatory fish data.  So how do the abundance and biomass of these fishes vary across latitude? And does this pattern change with season (i.e., summer versus fall)?

(2) Then I thought back to the fond memories of ripping up oyster habitat to check out the abundance of things that consume oysters (e.g., mud crabs).  Oh…the memory of that work gives me a warm and fuzzy feeling; I bet Tanya, Hanna, Linda and everyone else that helped feel the same way!  How do the abundances of these things change across latitude?  Are there larger crabs up north or down south?  How does the mud crab picture mesh with the predatory fish picture? 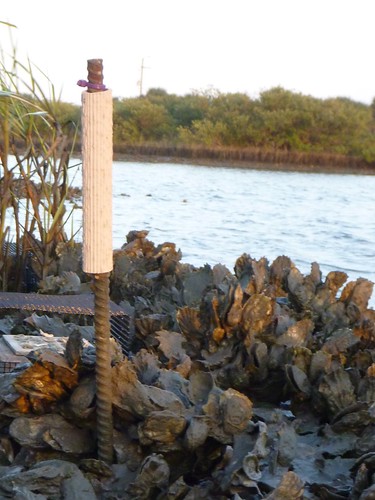 This spat stick is made of calcium carbonate, the same substance as oyster shell, and is ridged to simulate the ridges in those shells. That makes it an attractive landing spot for oyster spat (larval oysters), which tend to settle on oyster shells.

(3) Working our way down the food web and sticking with the oyster samples we ripped up back in August, how do oyster densities and oyster size change across latitude and how do these patterns mesh with the mudcrab and predatory fish data?

It’s pretty amazing that six months of work can be summarized so quickly into four topics.  Well, I kept hitting the coffee and got all of these data worked up in time for the first portion of our oyster summit.  Surprisingly, all inbound flights arrived on time and we all assembled last Friday to go over the data.  I’ll briefly lift the research curtain to illustrate what our data looked like: 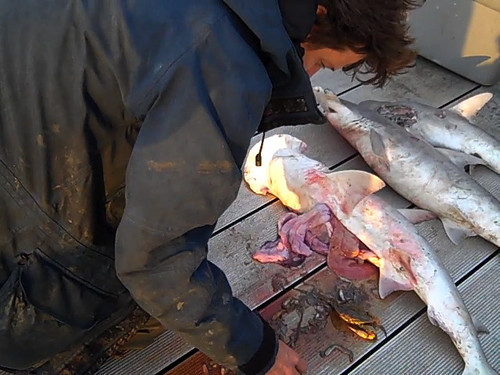 The Georgia reef gill nets trapped a lot of sharks. Here Dr. Jeb Byers is removing blue crabs (also an oyster reef predator) from shark bellies. The trapping done on these reefs is clarifying the food web for these habitats.

(1) Although we predicted predator abundance to increase at lower latitudes, predator abundance and the number of different predators peaked in Georgia/South Carolina.  This is because lots of the species we have in Florida were also in Georgia.  And, Georgia has lots of sharks!  Needless to say, Jeb’s crew has been the busiest during gillnet sampling.  Jon and Mike’s crew have had it pretty easy (no offense)!  The workload reduced for everyone in the fall, but the differences across latitude stayed relatively the same.  The really cool result was the pattern that hardhead catfish are extremely important and the most abundant predatory fish on Florida reefs; I love those slimy things.

(3) And the abundance of large, market size oysters was highest where predatory fish were most abundant (GA/SC).

(4) Amazingly, we all did a good job selecting oyster reefs with equivalent salinities (this can vary a lot just within one estuary) and temperature was the same across all of our sites until December….instrumentation up north got covered in ice!  Glad I was assigned the relatively tropical reefs in Florida.  Finally, oyster recruitment in NC and Florida appears to proceed at a trickle while that of GA/SC is a flood-like situation during the summer. 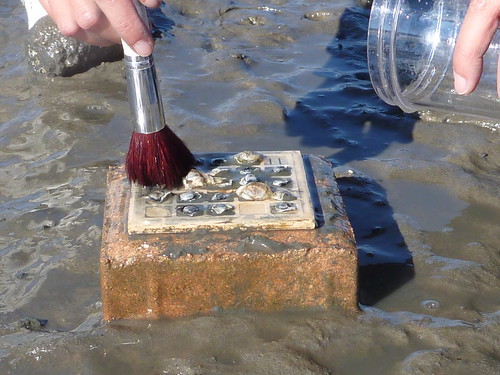 A month after first being deployed, Tanya and Hanna inspect an Alligator Harbor tile. You can see that some of the oysters have definitely started growing, but also that some of the spat became unglued. When they run the experiment again, they'll use a different adhesive more suitable for a marine environment.

After we all soaked that in, we then talked about the tile experiment.  While these data were really cool (mortality presumably due to mudcrabs was lowest where predatory fish were most abundant = GA), we worried about being able to tease apart the effects of flow, sedimentation, and predation.  Unfortunately, this experiment seems to uphold my record with experiments: they never work the first time.  We’ll probably repeat this in fall of 2011 with a much better design to account for flow and sedimentation.

Before breaking for a nice communal dinner at my place, Mike summarized the nutrient cycling (sediment) data that we have been collecting.  In short, having lots of living oysters really promotes de-nitrification processes and our sampling picked this up.

On day 2 of the summit, we worked through what made us happy about the monitoring data, what things we could add on to make us happier, and that we should continue this monitoring through the summer of 2011.  This actually took all morning. 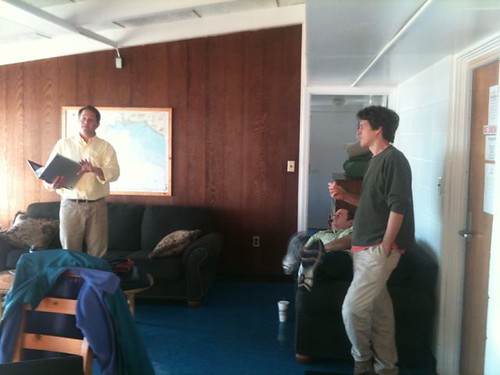 On day 2, the oyster summit moved into the more comfortable location of the Marine Lab guest house.

After a quick lunch break, we then reconvened in another room with a better view (nice to change up the scenery) to go over how we should experimentally test the linkages I mentioned above.  This is where the saw blade of productivity met a strong wood knot.  Personally, I became horribly confused, fatigued and was utterly useless.  This resulted in lots of disagreement on how to proceed and possibly a few ruffled feathers.  But nothing that some good food and NFL playoff football couldn’t cure.

After taking in a beautiful winter sunset over the waters off the lab, we ditched the work and began rehashing old and funny stories about each other.

Amazingly, we awoke the next morning and fashioned together a great experimental design that we will implement beginning June 2011.  To Jeb’s disappointment, this will not involve large sharks, but we will get to play with catfish!

But now it’s time to prepare for our winter fish and crab sampling.  It will be interesting to see what uses these reefs during the dark and cold of winter!

Thanks for following us during 2010, and please stick around for 2011 as I’m sure things will get really interesting as we prepare for our large field experiment.

thanks for the good questions. First, the pattern of more crabs and less fish leading to fewer and smaller oysters does fit the trophic cascade hypothesis. When you then look at GA/SC and see the opposite pattern…more predatory fishes, less crabs, and more oysters…then the hypothesis is even further supported.

However, we see much more oyster recruitment in GA/SC than in the other locations. So, the oyster patterns could also be due to supply-side ecology concepts (more or less larvae), in addition to bottom-up control (more or less phytoplankton food for oysters); we haven’t looked at the phytoplankton data yet.

So, this is what the year 2 field experiments will help tease apart.

We will all be at benthics, so let’s talk some more about this then.

Hey David,
I wonder if your sites with the more crabs and less predatory fish is the result of a trophic cascade, and curious as to what reasons the northern sites might have less fish (I am going to assume fishing pressure is the same, but I could be wrong)?
Another thought – is the larger oysters in SC/GA a result of less predation pressure or better growth rates/conditions?
Anyway, I love coming to check out your blog.
Hope to run into you guys at benthics!
John