In the Grass, On the Reef

A little over a year ago, when the FSU Coastal & Marine Laboratory and WFSU-TV – a TV station – started this online enterprise, the understanding was that at some point this would end up being a show.  And so here we are.  As you may have gathered from that video up there, this will be about predators and prey: who’s eating whom, and who’s scaring whom.  We will of course be doing this through the prism of David and Randall’s studies: the consumptive and non-consumptive effects of predators in salt marshes and oyster reefs, and the methods used to shine a light on these interactions. 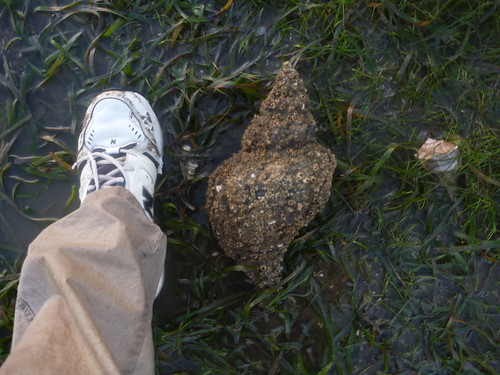 We’ll also spend some time just off of those Alligator Harbor oyster reefs, on Bay Mouth Bar.  I was just out there Monday, getting footage for the documentary (we’ll keep shooting until the beginning of June and finish editing mid-month).  When we got there, low tide was still a few hours away and we had to anchor our kayaks as the flats were submerged.  As the tide went out, several large horse conchs were stranded in the newly exposed seagrass beds.  The one in this photo is about as large as they get.  That’s a men’s size 13 sneaker next to the conch.  To the right of the conch is a snail one might consider large in another context, a lightning whelk.  Having withdrawn its bright orange body into its shell until the tide returns, the horse conch poses no threat to the other gastropod, a species on which it preys.

We’ll take you snail-and-crab-level into the grasses and into the crevices between oysters to make large the world of relatively small creatures.  It’s been addicting to me to get close up with a camera and see grass that was waist high turn into the towering forest it is for a periwinkle snail.  We’ll spend some time following these little guys around and get a closer look at how they live, and as always we’ll look at all of the work done to understand how this all works.  These critters are important to their habitats, which are in turn crucial to us.  We hope you’ll join us in learning about their world.

This marsh periwinkle climbs a cordgrass shoot as water- along with crown conchs and blue crabs – enters the marsh. 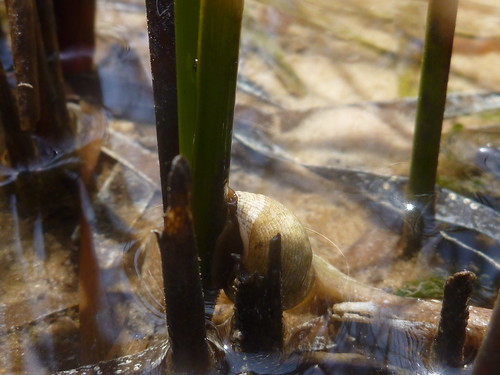 This PrEditor (Producer/ Editor, silhoutted) has lured his prey from its habitat and into his own: 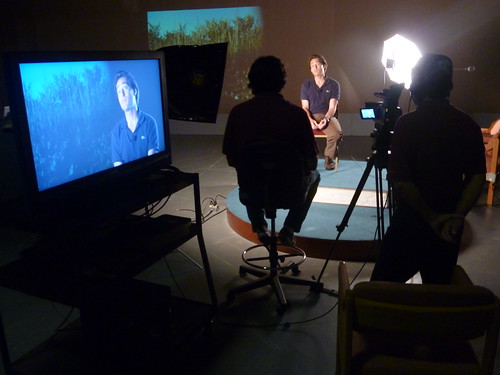 Images in the video are (in order):

David & Randall’s research is funded by the National Science Foundation.

Rob, that is great!!! Keep up the wonderful work. I will definitely watch! Beth