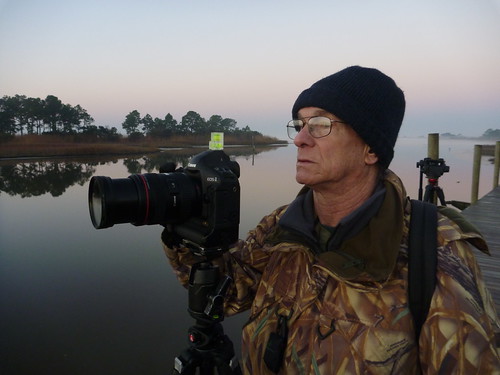 I have known John Spohrer since the late 1980’s, when he was introduced to me as one of the locals who lived year-round on St. George Island. I often rented houses with friends for weekends on the island back in those wacky 80’s and 90’s and he was always a welcome addition to whatever revelry would breakout in our kitchen, on our deck or on the beach.

In 1996 John wrote his first book, Fish, St. George Island, Florida. A few years later, after catching his first monster tarpon, John had an epiphany of sorts and decided that he would dedicate himself to understanding and advocating for wild habitats and creatures. In 2003 he published Florida’s Forgotten Coast, which featured his wildlife photography along with his reflections on man’s impact on the area’s wildlife. It wasn’t until more recently that I started to pay attention to how very serious John is about wildlife conservation and digital photography is his weapon of choice.

In this video we take an early morning field trip with John to shoot a sunrise. A task he has been doing every day for more than a year. But it is his interest in understanding the wild creatures during that time, as night turns to day, that is at the heart of his sunrise project.

In June, 2010, In the Grass, On the Reef producer Rob Diaz de Villegas also interviewed John about his wildlife photography.  Watch that video here.

What are those new images that are popping up on the blog?