Video: We explore Wewahitchka’s famous tupelo honey, from the ogeechee trees in the Dead Lakes, to the bees who make it, to the apiaries that bring it to us. 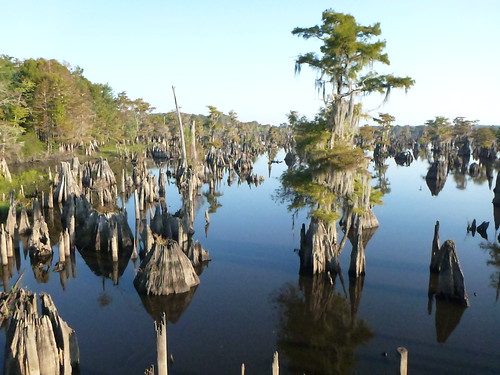 I have been wanting to do a video on the Dead Lakes and Wewa Tupelo honey for a couple of years now.  I caught the briefest glimpse of the Dead Lakes on the next to last day of RiverTrek 2012, as we were shuttled from our campsite in Wewahitchka back to Gaskin Park on the Apalachicola River.  The water was low then, during the dry part of a dry year, and so the cypress knees and pine trunks were well exposed.  Revisiting the same spot via kayak a couple of weeks ago, I passed over submerged and unseen knees.  For this video, we needed to visit just as the rainy season was ending.  I wanted to to see tupelo blooming and bees working.  Matt Godwin from Off the Map Expeditions set me up to do just that.

The Ogeechee tupelo (Nyssa ogeche) is a sensitive plant.  We learned on RiverTrek how reduced water flows on the Apalachicola over the last 30+ years have led to a 40% loss of tupelo in the forested floodplain.  It likes the water, but, as beekeeper Donnie Harcus of Donnie’s Bees tells us in the video, rain will knock tupelo flowers onto the ground where bees won’t pollinate them.  So it has to be wet, but it can’t rain too much, and it has to be fairly hot.  I guess flowers that produce premium honey have the right to be a little demanding. The other part of the honey equation is the animal that makes it: the honey bee.  “You can talk a week on bees,” Donnie told me.  “They’re just an amazing creature”  His job as a beekeeper has him racing to keep up with the bees and the blooms of the area.

When you visit the bee yard, you’ll see stacks of boxes in long rows.  Each box is a hive, and when the bees finish filling one box with honey, Donnie and his crew have to lay another one above it or the bees will swarm.  His most efficient bees have stacks that are five boxes high.

The bees we visited were busy making tupelo honey.  Donnie hadn’t yet touched it, as the hives weren’t filled.

He has to move the hives to the flowers he wants them to pollinate.  Before the tupelo bloomed, the hives were closer to where titi, maple, and highbush gall berry trees were flowering.  The bees create from a combination of these flowers something called red honey.  When the tupelo bloom ends, the boxes go to California not to make honey, but to help with almond harvest.  Bees do much more to feed us than make honey, aiding in the production of $20 to 30 billion of produce in the United States alone (which makes their rapid decline all the more concerning).

Back where Donnie extracts the honey from the honeycomb, his crew was still working on red honey.  This is bakery grade honey, Donnie says, meant to be processed and used in cereal, bread, and shampoo.  The tupelo is table grade; you are meant to drizzle it on your biscuits and taste it.  The red honey wasn’t bad though.  When they offered us some honeycomb to chew on, I felt sad that, as Donnie says, this honey will be “run through a whole line of filters.  It probably won’t have any pollen when they get done.”  It was a rare treat to eat honey right out of a container built for it by bees. 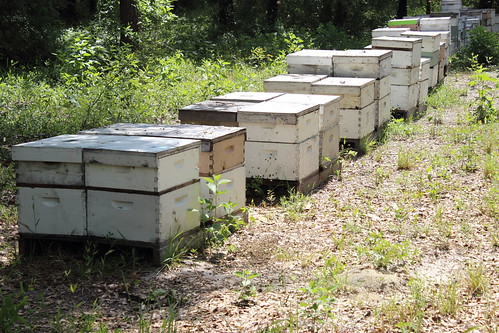 Beekeepers can’t control where bees will fly, so they will never produce 100% tupelo honey. Apiaries get their honey tested, and that which has at least 51% tupelo pollen grains can be called tupelo honey.

At Smiley Apiaries, we sampled some more varieties.  I’ve always been partial to wildflower honey and its particular tang.  Every year, different flowers bloom in different quantities, and so the character is different from one year to the next.  The fall bloom is different than the spring bloom.  We tasted very different wildflower vintages from this year and last, as well as orange blossom (with a subtle hint of orange flavor), highbush gall berry, and of course tupelo.

Tupelo is prized for its flavor and its reputed resistance to crystallization.  It’s a fitting product for so unique a location.  Many of the bees are positioned around protected lands that sit along the Apalachicola and Chipola Rivers, lands that shelter tupelo swamps.  We drove through the Apalachicola Wildlife and Environmental Area to get to Donnie’s Bees. As long as enough water keeps flowing into these swamps, there will be enough ogeechee to sustain the industry in Wewahitchka. Nestled between the mighty Apalach and that place where the Chipola turns into the Dead Lakes, Wewa is a river town that makes the most of its water.