Video: Kayaking in, and hiking around, the Apalachicola River.

Last year’s RiverTrek kicked off a year where we made the Apalachicola River and Bay a focus of the In the Grass, On the Reef (IGOR) project.  As with this year’s video, last year’s was a two-parter.  Watch Part 1, Days 1 and 2, here.  Watch Part 2, Days 3 through 5, here.  In Part 2, we looked at how low river flows last year precipitated the crash of the Apalachicola Bay oyster fishery.  Shortly after, IGOR team member Dr. David Kimbro began investigating the oyster stocks more closely.  You can follow that research here.

This video focuses on a 5-day kayak and canoe adventure down Florida’s longest river.  RiverTrek is a fundraiser for the Apalachicola Riverkeeper.  Riverkeeper staff and volunteers have been an immense help in producing our Apalachicola videos and in getting them seen.  Thank you to Dan, Shannon, Tom, Georgia, Doug, and everyone else for allowing us to be part of the adventure. Getting back on the Apalachicola River for RiverTrek 2013, we’ve come full circle.  On RiverTrek 2012, we journeyed down the entirety of the Apalachicola River, and explored some of the area around it.  We climbed the tallest river bluff in Florida, Alum Bluff.  In a wild corner of Torreya State Park, we followed Means Creek into a small ravine and ultimately into a cave.  We camped on sand bars, many of which were augmented by river sediments dredged by the Army Corps of Engineers, and climbed the largest sand spoil of them all- Sand Mountain.  When the trip was over, our collaborator, Dr. David Kimbro, started his research into the cause of the Apalachicola Bay oyster fishery collapse.  Within a few months, we traveled from the top of Alum Bluff to the bottom of Apalachicola Bay, all in an attempt to better understand this large and complex river and bay system. 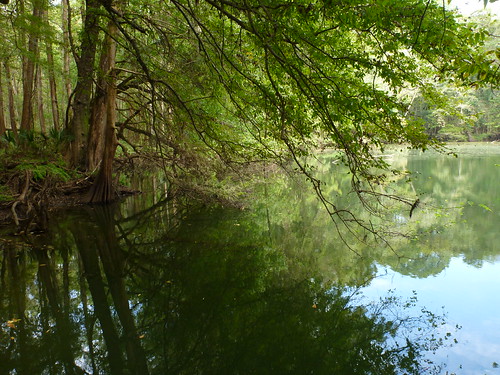 Aspalaga Blue Spring lies just a mile off of the Apalachicola River, at mile marker 98. From a sand bar on the west side, one would bushwhack a mile into the woods to find it.

A year later, we return to the river for RiverTrek 2013.  The Apalachicola seemed familiar, yet different, like a friend you haven’t seen for a little while.  After last year’s drought and record low flows, higher water this year made for a slightly different feel.  As you can see in the video, we had choices to make about where we would sleep the first night, as the Alum Bluff sand bar was much more submerged than it was last year.  And, we were moving a little faster.

More water is flowing in the creeks and sloughs, the smaller waterways that add 300 miles of banks to the 106 mile river.  This increases foraging grounds for fish, and connect the river to swamps and decomposing plant matter that ultimately feed oysters in the bay.

A little bit of water one year won’t fix all that is wrong with the river, though that water is critically necessary.  The alteration of the river channel affects how water flows into these smaller channels, and increases erosion.  And water released from the dam needs to mimic the seasonal cycles of the river, with larger discharges in the wet months (Spring and Summer) and less in the dry months (ramping down over summer and back up again in later winter).  This is an intricate system, and all of its parts have to properly function for the system as a whole to succeed. 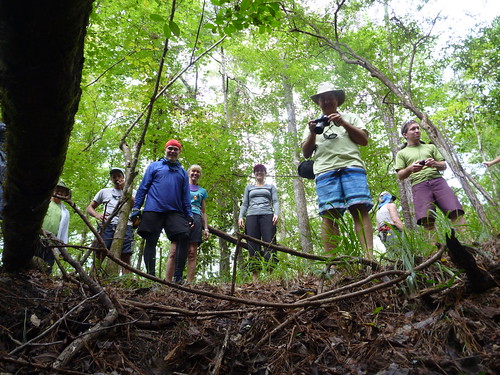 My fellow RiverTrekkers wait for me as I prepare to climb out of a cave on Means Creek. This group paddled to raise money for the Apalachicola Riverkeeper, an organization that advocates for Florida’s share of water in the Apalachicola/ Chattahoochee/ Flint basin. Over the last few decades, many have fought for the Apalachicola, which is downstream of the other two rivers.

A lot of the time, we don’t appreciate something until we’re in danger of losing it.  The crash of the Apalachicola Bay oyster fishery was an eye opener for a lot of people as to how reliant the Bay is on the river flow.  But this is a fight that has been waged for decades, between Florida, Georgia, and Alabama, and against the Army Corps of Engineers’ policies in managing the river and its flow.  In this video, Part 1 of 2, we explore the area around the river, bushwhacking through the woods to clear, cool springs and climbing in the bluffs above the river for a better vantage point.  Next week, in Part 2, we take a quick look at the decades long struggle with the Corps, and see that oyster beds aren’t the only habitat that need fresh water.  And we kayak into the “quintessential” cypress/ tupelo swamp- Sutton Lake.

Music in the video by pitx and Cross(o)ver.

Learn more about the Apalachicola Bluffs and Ravines Preserve, and the Garden of Eden Trail, here.