Wildlife Watching under the Sun (and Moon) at St. Marks NWR

Tomorrow, Wednesday May 9 at 7:30 PM/ ET, we present our latest EcoAdventure- wildlife watching in the Saint Marks National Wildlife Refuge.  Migratory birds are making their way north and many like to make use of the extensive marshes, pools, and ponds as a stopover (our regular readers know how well stocked with food a salt marsh can be). This is a warmer time of year, so reptiles are more abundant, or at least more visibly abundant.  The Refuge is thick with wildlife; it’s a gateway site of the Great Florida Birding and Wildlife Trail. So you just drive into the Refuge and you’ll automatically see a lot of animals, right? Almost, but not quite.  It helps to know where to go, and to pay attention to the sun and the moon. This red-bellied woodpecker and its mate had the attention of the photographers in our party, which included Lou and Betsy Kellenberger, and Andy Wraithmell and Alicia Wellman of Florida Fish and Wildlife.

We started with two spots accessible from Lighthouse Road. At the end of the road is, of course, the lighthouse. Across from the lighthouse is Lighthouse Pond. We saw some wading birds, as you do throughout a lot of the Refuge, as well as red-breasted mergansers, some very animated ducks. There is a trail around the pond on which we saw cotton rats and a snake called a black racer. Not too far from there on Lighthouse Road is Headquarters Pond, which has a nice, big observation tower. If you have a camera with a long lens, you can shoot to every corner of the pond. On the far edge is where we saw deer, which are not uncommon early in the morning though they do not usually wade as far into the pond as on that day. There were plenty of alligators there; they made themselves more apparent as it got warmer. Cold blooded reptiles are solar powered, so they’ll be out in the sun. Right behind the tower we saw two red-bellied woodpeckers that seem to be nesting in one of the trees there. 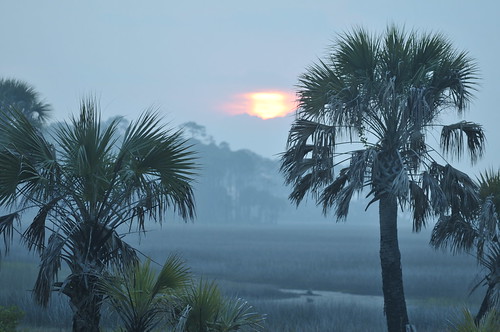 When nature viewing, it helps to wake up early.

The rest of the sites we visited were only accessible on foot or on bicycle.  Plan on hiking out to the Stoney Bayou Pool, Mounds Pool or Tower Pool (which is listed as Mounds Pond on Google Earth). The Stoney Bayou Pool had a lot of larger alligators; Tower Pool is a great place to watch migratory shorebirds. Whereas alligators are solar powered, the shore birds are under an indirect lunar influence. If you want to see them, come in the hour or two before high tide. As the marshes and mud flats start flooding, the birds will fly over the dike where you’re standing and into the pool. The pool fills up with dozens, even hundreds of birds. You can check the tides on this web site.  The fastest tides make for the most impressive flyovers, those are on the new and full moons.  Allot about 30 minutes for walking to this site, and remember that the Refuge is only open during daytime hours.

This is by no means an all-inclusive guide.  If you have any tips, feel free to share them in the comments section.

[…] locations and timing considerations in last week’s post (with a map), which you can read here. It was great to meet Lou and Betsy Kellenberger, who have a real love for the place, and Alicia […]