Video: Kayaking and Canoeing the Wacissa with the Green Guides

When the video above aired on dimensions, several individuals in our community took note of a statement made by George Weymouth.  He was explaining how hydrilla, an invasive plant species overtaking rivers in our state, had led to Limpkins entirely abandoning the Wakulla River (which has its source at Wakulla Springs).  He said that herbicides used to control the plant led to a die off of apple snails, the limpkin’s main food source.

The reaction to this statement started me on a quest, with the several aforementioned individuals guiding me closer, and at times seemingly further, from an answer to what happened to the limpkins at Wakulla Springs.

Cynthia Paulson was the first to write:

Hope this message finds you doing well.  Didn’t get a chance to see your most recent video when it was televised, so am waiting for you to post it on YouTube.

I did get some feedback however, and wanted to correct a statement that George said regarding the limpkins missing from Wakulla Springs.

In 1997, the ecology surrounding Wakulla Springs began to change.  A decline was noted in the apple snail population which led to the eventual exodus of all limpkins.  It was during this time that the nutrient load measured in the Springs basin was increasing. This lead to overgrowth of suffocating algae and of the hydrilla which can grow up to an inch or more a day.  The annual spraying of the hydrilla did not begin until 2006, so it was not the herbicide that eradicated the apple snails.  The apple snails and the limpkins were gone before the spraying ever began. 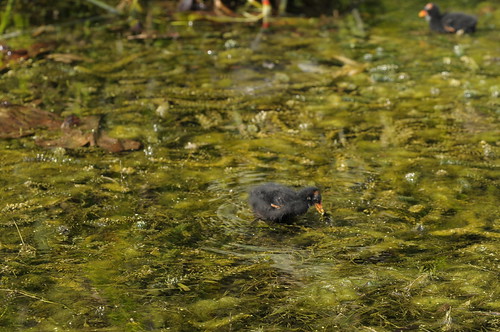 A moorhen chick makes its way across a mat of hydrilla at Wakulla Springs.

What does she mean by “nutrient load?”  Cynthia is referring specifically to  phosphorus and nitrogen, nutrients essential to plant growth.  In our gardens, and on farms, we add controlled amounts of these elements into our soil through fertilizer or compost.  When fertilizers wash into our waterways, nitrogen and phosphorus feed algae and cause algal blooms that deplete oxygen and block sunlight from reaching other plants.  Nutrients also feed hydrilla.

So now I know that hydrilla and algae changed the ecology at Wakulla Springs, and this change in habitat may have finished off the snail population.  But maybe not. Jim Stevenson served 20 years as Chief Naturalist for the Florida State Park System.  He gave me a more detailed timeline of events that indicates that perhaps hydrilla isn’t our prime suspect:

Park Biologist Scott Savery is the most knowledgeable about this matter but according to my fact sheet, the Apple Snail and the Limpkin began declining in 1995 and the Limpkins were gone by 2000.  Hydrilla was discovered in the spring in 1997 and the heavy growth of algae was noted in 1998.  The park staff tried to control hydrilla mechanically for a few years but that method was not effective.  The DEP Bureau of Invasive Plant Control conducted the first herbicide treatment April 2006(?).  They modify the treatment each time so as to use the least amount of herbicide and still obtain the needed level of control.  I have copied Scott in case he wants to clarify any of the above.

Scott Savery’s only correction was that the first treatment was done in 2002, not 2006.  He also identifies the three most likely suspects in the disappearance of apple snails from Wakulla Springs:

2) The arrival of hydrilla in April of 1997 in the river and the subsequent removal of the snail’s preferred habitat by the rapid infestation of this exotic plant.

3) Increase nutrient loading in the river over the last 30 years.

Now we have three suspects who, either independently or in conjunction, killed off the snails. 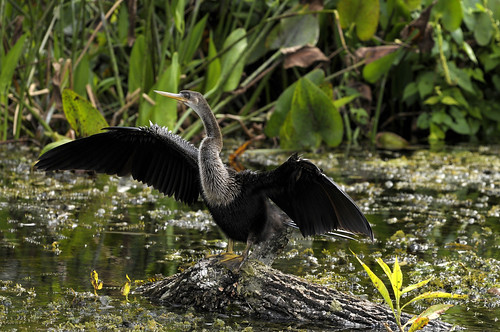 While the limpkins may be gone from Wakulla Springs, it remains a prime spot for wildlife watchers.

Dana C. Bryan is the Environmental Policy Coordinator for the State Park Service.  He passed some more clues our way.  1991 through 1995 saw mostly double digit limpkin counts, but starting in 1996, the next four counts were 2, 4, 3, and 5, and have been 0 ever since.  The sharp decline came after the storms but before the spotting of hydrilla, which points to Suspect 1.  But why didn’t the limpkin count drop until over a year after the storms?  He explains:

Phil Darby has demonstrated that apple-snails only live one year, thus making each summer’s recruitment critical for replacing the population.

If the flooding wiped out most of the snail clutches of that summer, it would account for the drop in Limpkins first noticed the following year.  Limpkins could continue to eat adult snails until they died off naturally at about 1 year of age, and then freshwater mussels, possibly accounting for the trailing off of resident Limpkins until their eventual disappearance in 2000.  No monitoring of mussels has occurred, although the exploding hydrilla since 1997 may have affected their abundance.

So, maybe Suspect 1 took care of the snails, and Suspect 2 took out another potential limpkin food source?  He offers a theory on how hydrilla might affect apple snails as well:

While hydrilla doesn’t seem to be the cause of the decline, it may be having an effect on the recovery.  I’ve speculated that apple-snails may have a difficult time in the water column when it’s full of hydrilla.  They do regularly rise to breath and then drop back down to forage, so areas socked in with hydrilla may no longer be usable. 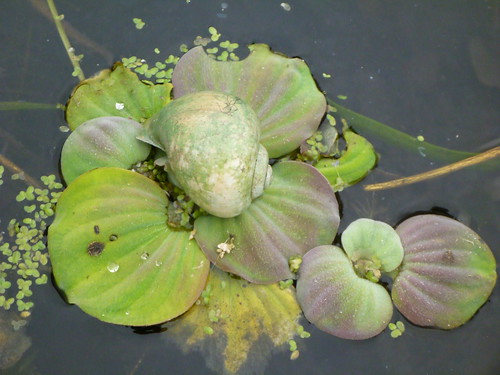 An apple snail on the Wacissa River. While not far from Wakulla Springs, and though it too has a hydrilla problem, limpkins can still be found here.

Signs point to the 1994 storms as a catalyst for the disappearance, though the hydrilla may be making it difficult for the snail population to reestablish itself.  It’s a reasonable possibility, though no one knows for sure.

This case, unlike most murder mysteries, may actually see a reappearance of the victim.  Jess Van Dyke, with the state’s Bureau of Invasive Plants, has overseen the hydrilla eradication and introduced 3,000 snails back into the Springs through 2007.  In Summer 2010,  2158 snail egg clusters were counted.  This means that three years after apple snails were placed there (and three snail life cycles), there seems to be a healthy breeding population.  Perhaps the snails are starting a resurgence.  And perhaps the limpkins will be back as well.  They are still seen in the Wacissa River (that’s what we’re looking for in the video above).  And they’re still seen at the river that converges with the Wakulla.  Woody Lewis, Green Guide who gives tours on St. Marks River, writes:

Hi Rob.  We have a pair of limpkins at the headwaters (in the basin around the spring) of the St Marks River.  We see them there fairly regularly, but they are always in different areas, as birds tend to be.  I could try and “show” them to you, but it would be a hit-and-miss thing.  Then again, we could get lucky!  We would need to paddle through some fairly thick surface vegetation to get to their “normal” feeding areas.

The video of the Wacissa was great!  And that crew you had was quite entertaining too. A limpkin photographed by Woody Lewis at the headwaters of the St. Marks River.

Maybe we can’t definitively say “case closed” as to the cause of apple snail’s disappearance.  But maybe we haven’t said the final “good-bye” to limpkins in Wakulla Springs either.

Next on EcoAdventure North Florida, we head north of East Point on State Road 65, checking birding and paddling sites along the Apalachicola River, and into the depths of Tate’s Hell.

Thanks to Cynthia Paulson, Jim Stevenson, Scott Savery, Dana Bryan, Woody Lewis, and Lynn Artz.  Music in the video was by Philippe Mangold.  Put your comments in the box below.

In the Grass, On the Reef, A World Away

Biodiversity and the Apalachicola: Why it’s Worth a Visit

There has been one limpkin at Wakulla Springs State Park since September of 2011 and can be seen on regular basis via the boat tours.

Sue, that’s excellent news. It’s looking hopeful that they can make a rebound. They have done so before. After almost having been almost entirely run off at the beginning of the 20th Century, they had huge numbers in 1960’s and 1970’s.

[…] also noticed a plentitude of apple snails. Last December we paddled the Wacissa River looking for limpkins, and while we saw a lot of cool things, it was a little late in the year and […]