We revisited the Aucilla Sinks trail in January of 2021 with state geologist Harley Means. Click to see this video to learn about geology of this marvel, how it was created, and what it can teach us about our aquifer.

Dimensions’ encore presentation on Sunday, April 15 at 10 AM/ ET on WFSU-TV

On this blog, we usually refer to location we visit by the kind of habitat it is, and its foundation species.  Salt marshes and cordgrass, oyster reefs and oysters, pine flatwoods and longleaf pine- you get the picture.  We think of things biologically here, which makes sense, since my primary co-contributors are biologists and because our local abundance of life draws us to the outdoors.  For the EcoAdventure airing tonight (7:30 PM/ ET on WFSU-TV’s dimensions), our draw is not biological but rather geological.  Tonight, we’re going to a place in Florida where you can see some rocks. From caves such as this one, the Aucilla reemerges periodically in sinkholes and short river runs.

The Aucilla River takes a unique path down to the Gulf of Mexico.  It’s a good sized river that all of a sudden gets swallowed by the earth, and then reappears in what Morgan Wilbur (Aucilla Wildlife Management Area’s Chief Biologist) calls karst windows, before resuming as a fully flowing river at Nutall Rise.  So what is a karst window?  They’re sinkholes, caused by the erosion of the limestone or dolomite that underlies most of our state.  In a karst topography, rainwater moves through soil and through porous rock.  In North Florida, that water ends up in the Floridan Aquifer, which is the source of our drinking water and of bodies of water such as Wakulla Springs.  That water can wear down pieces of the rock as it passes through, causing cave ins.  As extensive as the Floridan Aquifer is (North Florida and Georgia, and parts of Alabama and South Carolina), there aren’t many places where the land behaves quite like it does at the Aucilla Sinks.  This is why Kent Wimmer of the Florida Trail Association wanted to show the area to us. 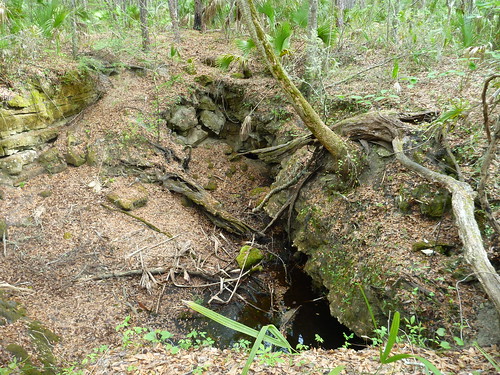 The Sinks section of the Florida Scenic Hiking Trail is where, as Kent says in the piece, “you can see Florida’s basement.”  You can see places where the trees grow sideways as the land slowly gets pulled into holes where limestone had been.  You are walking along what had once been underground caves, as evidenced by the walls of rock around you.  And every sink looks different than the last; I feel like I could have shot for days there.