With oil arriving on FL beaches, the race is on. We’ll be out in our sites this week collecting more data. We want to be sure that we know as much as possible about:

(1) the condition of our sites before oil arrives;

(2) the amount and specific location of any oil that does reach our sites; and

(3) the response of the marsh plants and animals to this oil.

We expect that there will be considerable variability in the degree and extent of damage to our sites, both because oil exposure will likely be patchy (at least at first), and because marshes are likely to differ in their ability to either withstand or recover from oil. And this variation in marsh response provides a prime opportunity for us to learn more about the specific marsh characteristics that either hinder or promote recovery, information that could be valuable in the aftermath of this disaster. 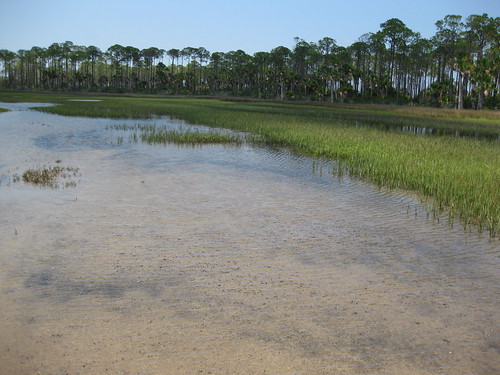 One aspect of marshes that may aid in the response to oil is plant species diversity. A substantial number of scientific studies in the ocean and on land illustrate that having more species in an area can reduce the impacts of disturbance. For example, research by David Tilman and colleagues shows that drought impacts are less severe in Minnesota grasslands with more plant species. A number of different processes can contribute to these positive effects of diversity, but they generally result from the fact that individual species typically differ in their life history (the timing of growth, reproduction, etc.) and in their response to specific disturbances. Thus, if you have more species, you’re more likely to contain one or two that are able to withstand disturbance as it occurs, or that are able to re-grow quickly following the disturbance.

So, back to salt marshes and oil. We know from previous studies that different marsh plants have different tolerances for oil (1,2). Because the chances of a more tolerant plant species being present are greater when there are more plant species around, it seems possible that marsh plant diversity could reduce the negative impacts of oil exposure. We’ll get some idea of whether or not this is the case from our surveys of natural marshes – we know the plant species diversity before oil gets there, and we’ll be able to record the impacts to the marsh once oil arrives to see if the negative effects are reduced in areas with more species. But to get the “real” story (i.e., a story not complicated by characteristics other than plant species diversity that vary from marsh to marsh), we need to do an experiment.

Recently, we did just that – we set up an experiment to test whether marshes (“plots”) with more species (3) are less impacted by oil than marshes with few species (1). 3 species may not seem particularly diverse, but it’s on par with what we find in natural marshes. There’s a chance that our experimental site won’t get any oil, which quite honestly will be fine by me. (In that case, we’ll simply look at how marsh productivity and growth differ due to marsh plant species diversity.) But, if it does, we’ll be positioned to examine how marsh plant species diversity affects the response to oil contamination.