Lake Jackson is nearly dry. The ground is mucky on this weekday morning and a few pools remain in places where the lakebed dips. Nearby water is flowing still from the north side of the lake in a rushing stream. It carves small valleys in the silt as it flows down into a sinkhole called Porter Hole Sink. From there, the water will drain into the Floridan Aquifer.

Several dozen people are visiting the lake on this day. Some worry Lake Jackson’s dry-down is a sad marker of the changing climate, but scientists say it’s actually a sign of a healthy lake.

Michael Hill is a retired biologist with the Florida Fish and Wildlife Conservation Commission. He says Lake Jackson has been in a cycle of draining and refilling for hundreds of years.

“Like when DeSoto was here for the First Christmas, you know he camped over near The Moon, you know he sent his troops all over the place. They didn’t report a big lake north of town. They just said it’s a savanna, it looked like a savanna. And the local Native Americans, they farmed it, hunted out here when it was a savanna,” Hill says. “It wasn’t always a lake, which is why they called it Okeeheepkee—vanishing waters.” 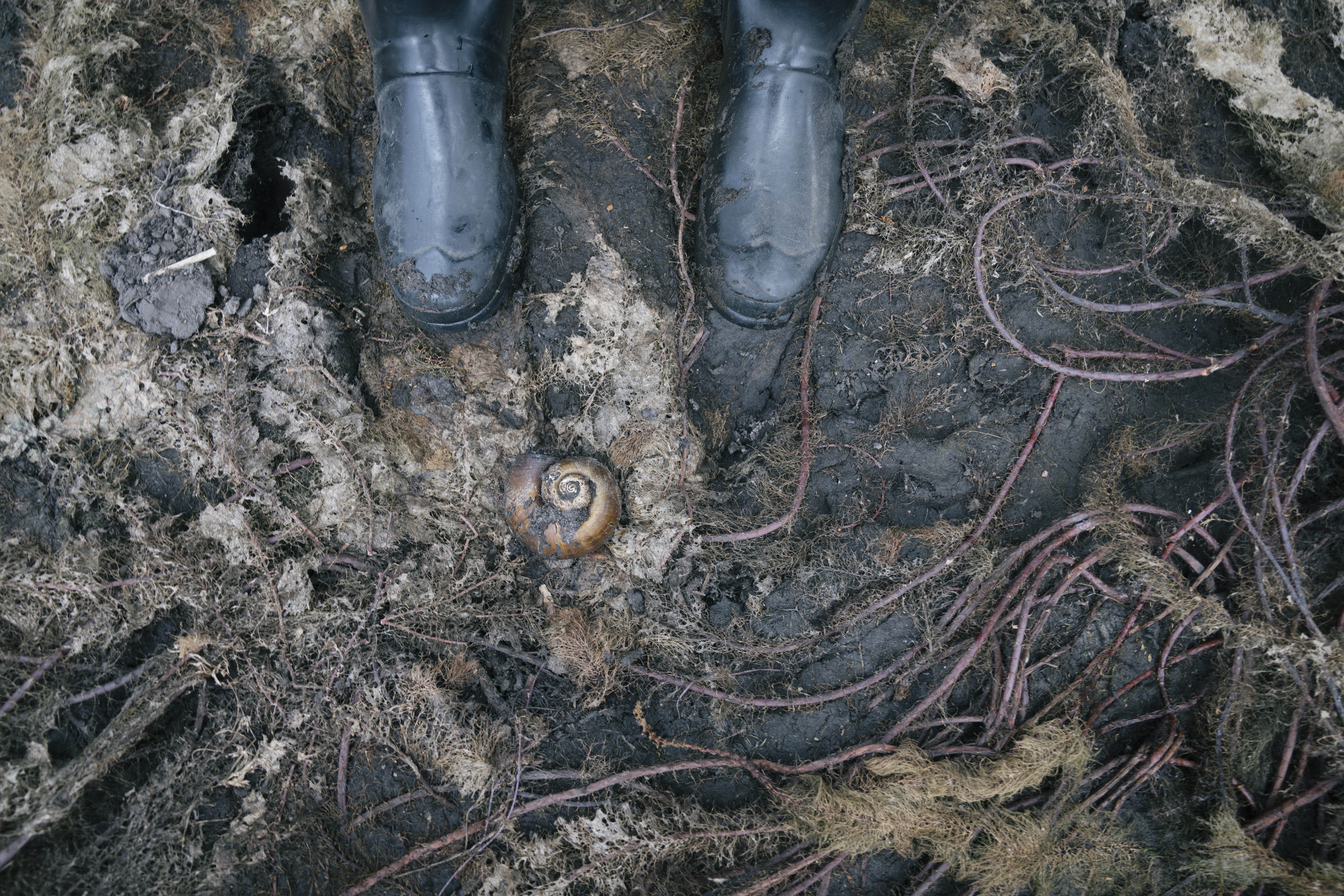 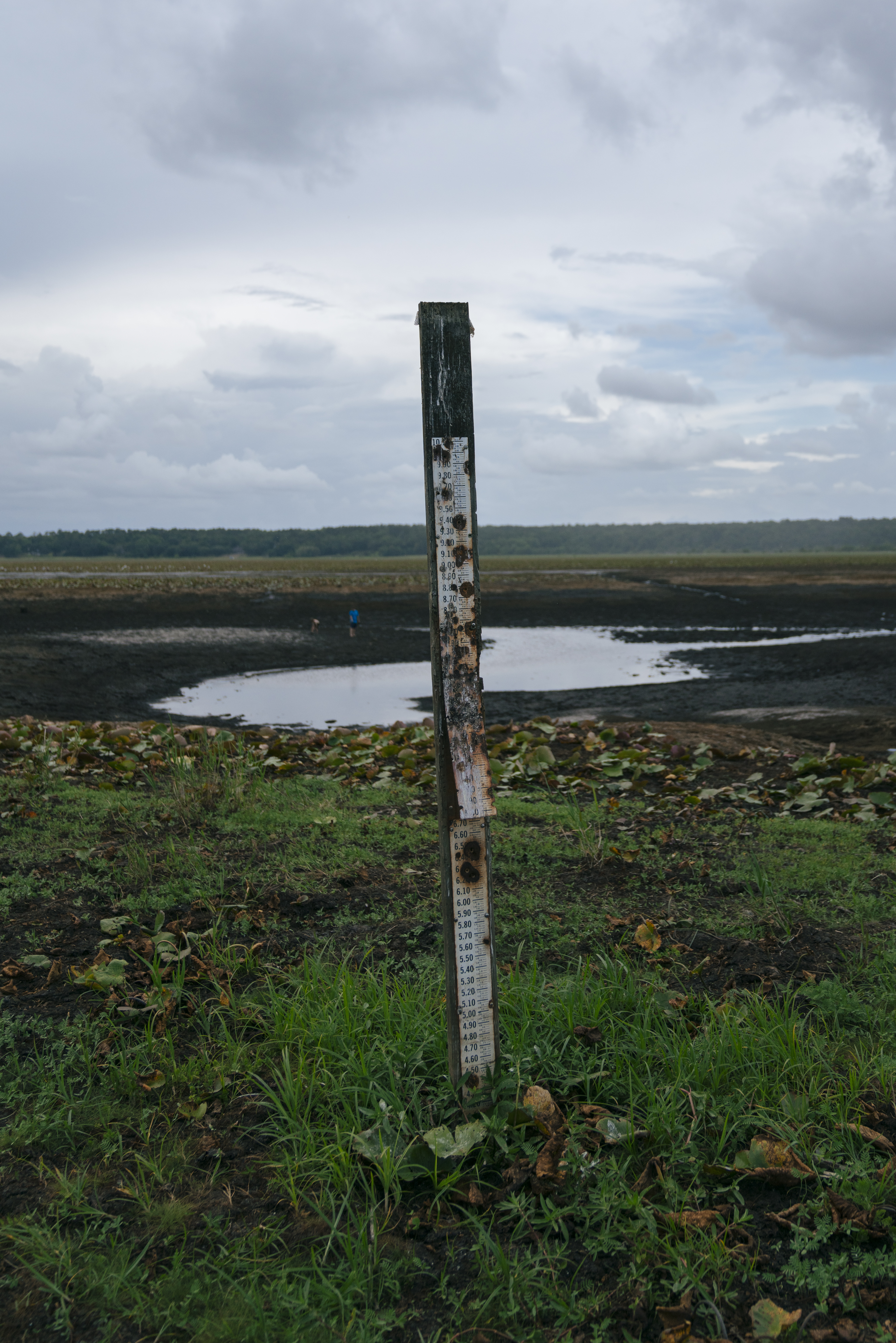 Lake Jackson’s dry downs are a natural process. It’s part of what keeps the lake healthy. It can keep invasive aquatic plants from getting much of a foothold since they’re not prepared to live in the dried-out bed. It’s also good for the fish.

Chris Paxton is a biologist with the FWC’s Division of Fresh Water Fisheries Management. He says the regular dry-downs are part of what’s given Lake Jackson a reputation as an excellent fishing spot.

“Because fish need this hard-packed mineralized soil. And the dry-down really helps through oxidation. It releases the nutrient load, it dries this muck layer and it gives the fish this really great substrate to spawn in where their eggs can be oxygenated. They’re not sinking down into a goo,” Paxton says.

Paxton says the dry-down does kill some of the fish. Some are swept with the water into the aquifer where there’s not enough oxygen and they die. Others are left behind in the mud and eaten by birds or raccoons, but many are living still in the several small pools spread throughout the drying lakebed. He says that should be enough to re-stock the lake when it refills. If it’s not, that’s something the FWC would do.

“I know that’s difficult to be a homeowner and see the lake go away and hear a bunch of nerd biologists talking about ‘oh this is great’ and ‘hurry up and wait!’ Because everybody likes to be told to hurry up and wait. But upon refill it will be beneficial,” Paxton says.

Each dry-down is different and experts can’t predict when the refill will happen. The lake isn’t fed by streams or underground springs. It gets its water from rainfall. Harley Means is an assistant state geologist with the Department of Environmental Protection.

Historically, Lake Jackson has dried down once every 20 to 25 years. Lately, that’s been happening a little more frequently. The most recent dry downs were recorded in 1999, 2006 and again in 2012. Some have questioned whether that’s a symptom of human activity. And Means says it could be. But he also says there’s not enough data to know how frequently dry-downs normally happen.

“Human activity and human land use in and around Lake Jackson has certainly altered hydroperiods and the land surface and the amount of water that can make it to the lake when we get sufficient rainfall. But I would also tell you that as a geologist, I think on time frames of thousands to millions of years, and we’re only talking about historic periods—maybe a couple hundred years of monitoring,” Means says. “So what is normal is related to how much data we have. So 10,000 or 12,000 years ago this lake may have just been a prairie for most of its time. But we don’t have those data.”

But Means maintains the dry-down is a good thing. He says it’s something to be enjoyed.

“People get to see a geologic process that’s happening right now right in front of your eyes. Most things that happen in geology happen over long time periods—millions of years. So changes in elevation and land surface and sea-level rise and fall. However, you can come out and see an active sinkhole right now and witness geology in action.”

August update: check out this cicada exiting its exuvia!  Also, tons of monarchs, other caterpillars, and insect predators.