A Port Charlotte family evacuates ahead of Hurricane Ian and loses their dog. Strangers come to help

While many parts of Ft. Myers and Naples were heavily hit by Hurricane Ian, one suburban neighborhood in south Naples was barely scathed. Here, the winding streets and pristine houses still have small piles of downed limbs stacked neatly in front of them, but people are also out playing golf on a bright, mild Fall Day. It’s been a week since the hurricane passed through.

The search is on

Sue law and her Kia Soul sit in a driveway in front of a stately one-story stucco home. Law just finished setting up a cage-trap on the bright green lawn. Inside the trap is a blanket. It’s open and waiting. Law has come prepared with lures of Vienna sausages, rotisserie chicken, a BBQ sauce concoction, and a snappy snare—a long pole with a retractable loop on the end.

“If they were running by, I’d be able to go *snap*” she says with a flick of her wrist, demonstrating how the snare works. “It doesn’t hurt, just shocks them right away and you have time to get a leash on them.”

Law is with Lost Pets of Collier County. She’s helping the Mas family track down their lost dog, an English Sheepdog mix named Baby. The family is from Port Charlotte, and they evacuated to this area to avoid Hurricane Ian’s wrath. The trap at this home is laid where Baby was last spotted. Several neighbors, like Sue Weatherford, the home owner, spotted the dog on their home security cameras and reached out to Law.

“It was on my camera and [the neighbor] down the way, [so] we’ve been out searching,” said Weatherford, gesturing to houses down the street. “She’s in a big community around the way,” and she’s running scared, said Weatherford.

She doesn’t know the Mas family but saw a post about a lost dog in a social media forum and reached out to help the family. In fact, lots of people – people that don’t know each other, or Baby– have been searching for the dog, posting photos and pointing out sightings.

“I was walking my dog and my dog started growling and I was like ‘what are you growling at? There’s no workers here,” said Ashleigh Maggiore, who also spotted Baby in her residential neighborhood, which is about a mile in the opposite direction of Weatherford’s home.

“So, I posted on the Naples mom’s page and Lost [Pets of] Collier. Then Anthony [Mas] came, and we saw her [Baby] a few times here, but she would just keep running.”

The Mas family eventually had to leave their evacuation rental when time was up. They tried to book another, but the owner raised the rate at the last minute to a price the family, with their nine adults and eight dogs, couldn’t afford. They had to give up their search for Baby and eventually found shelter in Orlando, unsure of the fate of their Port Charlotte home, and their lost dog.

This isn’t the first time Baby’s been alone in the world.

Mas found the dog ten years ago when he was working with a bank on foreclosures in Miami. He used to do work for banks on foreclosures and it was in the backyard of a foreclosed home that he found a dog that was tied up, her fur matted. She had just had a litter of puppies.

“And she was really emaciated,” said Rebecca Booth, Mas’ aunt. “Four [of the puppies] were dead on her.”

Mas tried to save another puppy, but it too later died. He was able to save the mother dog—which he renamed Baby, and her last two living puppies. The puppies found good homes, and Baby became a member of the Mas family.

Booth lives in the Ft. Myers area and took up the search for Baby after Mas and his family were forced out of their emergency rental. “When he heard she was crying, he was like ‘she thinks she’s been abandoned again, I can’t stand it,” said Law, standing next to Booth. The two were a mile away from where Law laid the cage trap for Baby.

It’s getting later in the evening now, and there’s a new threat. Bobcats and bears have been spotted nearby. And Booth knows a small dog like Baby could be a tempting treat.

By now, Baby’s been missing for eight days. She escaped just as Hurricane Ian was winding down. Anthony’s 23-year-old son Adrian has Autism. He took Baby outside for a bathroom break, as he usually does. But the problem is that Baby was an evacuee in an unfamiliar place. The family’s solar-powered rental was the only house on the street still lit and Baby was doing her business by the car. When Adrian went to check on her, she was gone. Law says he blames himself for losing the dog, who was like a service dog to him.

“He says he’s just written with guilt, because he thinks it’s his fault that she got away from him. But it can happen to anybody,” said Law.

The family’s anxiety and worry have been mounting for days. But Sue Law, of Lost Pets of Collier County, is an expert pet finder.

“There’s a dog that I trapped that had been missing for 14 months. And I found him. It took me six weeks,” she explained.

Law has been in constant contact with the Mas family every step of the journey. And just hours after she set a trap, she makes a phone call. 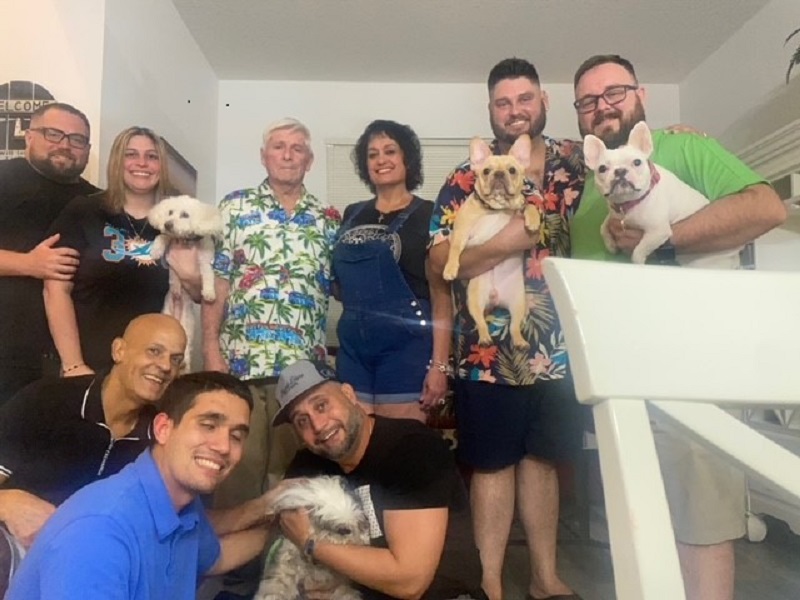 “We found baby!!! Whooo!!!!” Anthony Mas and his big family cheer loudly on the other end of the line. He’s talking fast, his voice shaking as he thanks Sue and Sue, Ashleigh, and the host of people who spotted the dog and posted about her on social media.

“They’re strangers,” said Mas, “but I don’t know how to thank everyone.”

In the end, it wasn’t the chicken that drew Baby in; a couple of teenagers that had heard about her, found her near Ashleigh Maggiore’s house. And Mas’ son Adrian is relieved.

“I’m very, very happy. I’m just glad we have our baby back. We’ve been missing her for so long,” he says, his quiet voice holding a quiver, too. Adrian can’t stop apologizing for the situation, but his dad Anthony reassures him it wasn’t his fault.

“I didn’t mean to lose her, it was an accident,” said Adrian.

It’s not your fault,” Anthony reassured him.

Once found, Law delivered Baby to Rebecca. She wrapped the dog in a blanket and helped her into the backseat of a black SUV and into Rebecca’s lap. The dog had sandspurs on her paws and around her mouth. Her once well-groomed charcoal gray and white coat was matted and muddy. And she sat, quietly panting. She looked exhausted. Too tired to put up so much as a bark. But her tail is still wagged under the loving hands of Rebecca, seemingly knowing she was safe, and that that rest of her family are on the way.

This story was co-reported by WGCU’s Eileen Kelley. A version of this story appeared on NPR on October 8, 2022.

Lawmakers will be back in Tallahassee later this year to work on property insurance, again